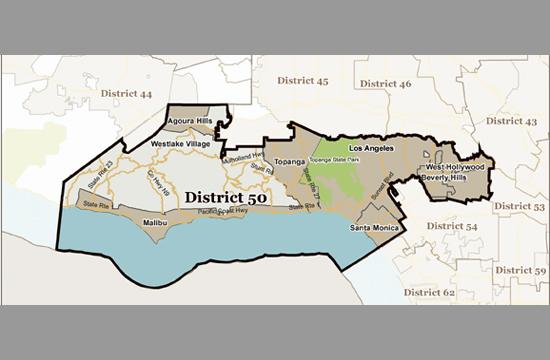 The California Citizens Redistricting Commission finalized the new, but controversial district voting maps for Congress, the State Senate and Assembly, and the State Board of Equalization on Aug. 15. The new boundaries could potentially change some of Santa Monica’s elected officials and are being challenged by some state Republican legislators and Latino activists.

But not all the elected officials contacted by The Mirror are unhappy with the results. Santa Monica Mayor Richard Bloom, who will run for the State Assembly in 2012, said he thought the new Assembly District 50 boundaries were great. He noted Santa Monica’s new Assembly district retains Malibu, Agoura Hills, Pacific Palisades, West Hollywood, Beverly Hills, and some of Los Angeles. “For me this is very exciting,” Bloom said. “This is the area where I grew up and the area I’m intimately familiar with.”

Bloom said the State Senate district boundary changes meant Santa Monica would have to learn “more about our neighbors in the South Bay” in the new Senate District 26, as Santa Monica is now paired with South Bay communities all the way to Rancho Palos Verdes.

The new boundaries will only come into effect after the 2012 elections.

Bloom said that for the first two years Santa Monica would not have an elected representative, as State Senator Fran Pavley’s term is not up until 2014. Therefore, the Senate Rules Committee would have to appoint someone to represent Santa Monica.

“Pavley would be the logical choice because she knows our interests intimately,” Bloom said.

Congressman Henry Waxman stated, “I have long enjoyed representing the citizens of Santa Monica, and I am pleased under the final map I will have the privilege of continuing to represent them.”

Latino activists are considering a court challenge because they are concerned they will be underrepresented in some of the newly drawn districts.

Redistricting is the process when district lines are redrawn within a state. The process occurs every 10 years after the census figures give a count of the total population of the United States and where people live.

Redistricting helps ensure that every person has equal representation by drawing districts with an equal number of people. This is the first time the maps were developed by a 14-member citizen commission. California state law mandates that the commission be made up of five Democrats, five Republicans, and four members who do not represent either of the two major political parties.

State Assembly member Julia Brownley, whose current district includes Santa Monica, did not respond to The Mirror’s request for a comment. She will not be able to run for the Assembly again due to term limits, but is eligible to run for State Senate.