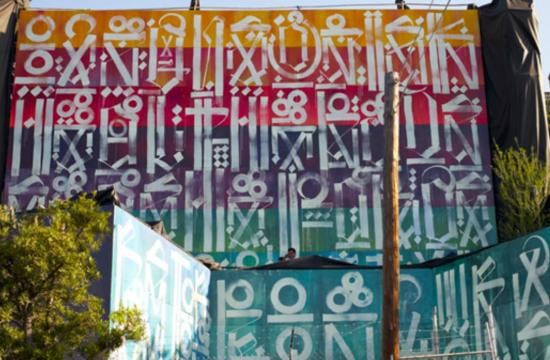 The hard work of dozens of committed craftsmen and laborers, who worked long, hot hours hidden beneath plastic sheeting and tarps on a Santa Monica home, were able to reveal all yesterday morning.

Longtime Heal the Bay volunteer Adam Corlin has a dream to protect the world’s seas when he bought the dilapidated house located at 825 Berkeley Street in northeast Santa Monica.

It was covered with graffiti and plywood – and occupied by squatters.

For Corlin, he saw the opportunity to create a “big billboard” to raise awareness about the ocean and animals who live in it.

So began “Oceans at Risk” project, which finally came to an end yesterday with the unveiling.

“Street artists use their art to express how they feel. The ocean and the animals who live there don’t have a voice,” Corlin says. “It’s a wonderful thing that these guys from the street are using their talents to speak for a cause that can’t speak for itself.”

The art project is composed of 150 wood panels hung on the scaffolding around the frame of an under-construction three-story house. It sits on a bluff with views of the Pacific Ocean.

No one in the neighborhood even knew there was an enormous art installation taking place until it was done.

“The world’s seas are hurting, be it from plastic pollution, overfishing or global warming,” he says. “But it’s not too late to change our ways. So, rethink your consumption habits — skip the plastic and watch the fertilizers. Keep trash off the streets. Donate to your favorite ocean-related nonprofit. Call your legislators and tell them to make ocean protection a priority.”

The art project will remain on display until Sept. 17 — Coastal Cleanup Day, which spans 65 countries.

It’s one of the largest volunteer projects in the world because it’s going to take everybody to bring awareness to what’s going on in the world with our oceans, Corlin says.