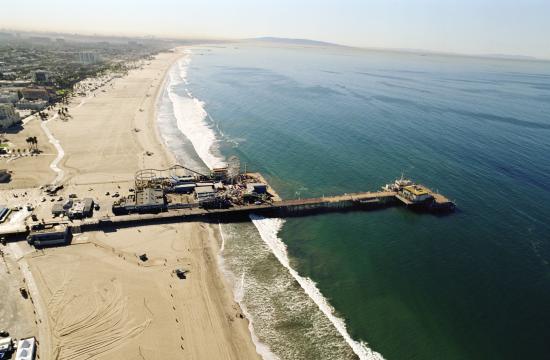 California beach towns such as Santa Monica and Venice Beach could face hefty economic losses if sea levels rise in the next century, according to results released today from a new state-commissioned study conducted by economists at San Francisco State University.

The study looked at the economic impact rising sea levels would have on five communities along the California coastline.

Venice Beach was one of these communities, and the study is worrying if sea levels do rise.

The results suggest Venice Beach could lose up to $440 million in tourism revenue between now and 2100 if sea levels rise by 4.6 feet, based on recent scientific studies.

Funded by the California Department of Boating and Waterways, the study examines the cost of coastal storm damage and erosion, both of which are expected to increase as sea levels rise.

It also forecasts the economic impact of sea level rise on tourism and natural habitats, as beaches that have been narrowed by erosion lose their appeal to visitors and their ability to sustain wildlife.

“Sea level rise will send reverberations throughout local and state economies,” said Philip King, associate professor of economics at San Francisco State University. “We also found that the economic risks and responses to a changing coastline will vary greatly over time and from beach to beach.”

The findings suggest that the cost and type of damage will vary depending on a community’s economy, geography and local decisions about land use.

For example, if sea level rises by 4.6 feet, Malibu beaches could lose almost $500 million in accumulated tourism revenue between now and 2100.