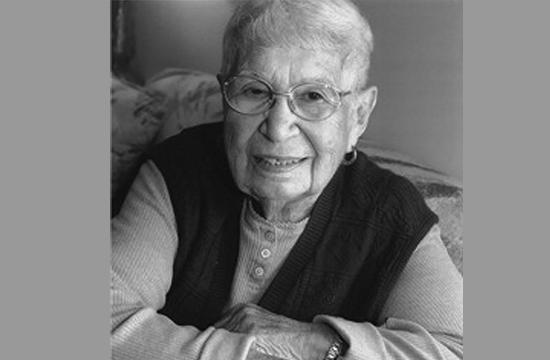 “A life-long progressive, she marshaled the arguments and stood solid. If you needed an ally, she was the one you wanted. She had values and she had ideals and she never wavered. I’m grateful to have known her on the picket line, working the phone banks, at city hall, at somebody’s backyard fundraiser. She was your sweet grandmother with a warm hug, a conscience and the strength to back it up.

I will miss you, Millie.”

These words, from her friend, former Santa Monica Mayor Jim Conn, will make anyone who knew Millie smile in recognition.

Millie was born in 1914. Her mother died in the influenza pandemic of 1919 and Millie was sent to live with her aunt. The depression came and existence was meager.

After high school, she went to work as an office worker and soon met Herman (Gaby) Rosenstein, a veteran of the Abraham Lincoln Brigade, the volunteer brigade that fought against the fascists in Spain.

He was then drafted into the U.S. Army. They decided it was time to marry, but it was December 1941 and all leaves had been cancelled because of Pearl Harbor. They quickly found a Justice of the Peace to marry them on Christmas Eve.

When Herman was discharged from the army they lived in the projects in New York and raised their two children, Paul and Fran. Herman worked in the electrical trades. When the children were young Millie wanted to stay home with them.

Her son Paul said, “My mother felt she had an unhappy childhood and she wanted to be with us and make sure we knew we were loved and supported. When I was about 10 she decided to go back to office work. The result was that our family made too much money to stay in the projects. We couldn’t find affordable housing in New York; we’d been to California and liked it, so our whole family moved to California. It was 1958, the same year the Dodgers moved to Los Angeles.”

The Rosensteins lived in the Fairfax area. They volunteered for Tom Bradley in his first campaign for the Los Angeles City Council. They worked against the Vietnam War and supported Eugene McCarthy for president.

Paul remembers, “It was about this time Millie took an assertiveness training class offered by a women’s movement group. It really made a difference in her life.”

They became part of a close group of politically progressive seniors who influenced Santa Monicans for Renter’s Rights, its politics and philosophy. They became members of the Santa Monica Democratic Club, where Millie served as president for eight years. She also served on the Senior Commission, the Social Services Commission and the Commission on the Status of Women. She volunteered for Senior Peer Counseling and for KCRW.

Millie also worked on Tom Hayden’s campaign for assembly and when Jane Fonda came to Millie’s house party for Tom’s campaign, Millie pronounced it a “highlight of my life.”

In addition to all her community work she was an avid reader and a classical music fan, often going to Sunday matinees at the Dorothy Chandler Pavilion.

“Millie was also an eager traveler,” Millie’s daughter-in-law, Ada Hollie, said, “Travelling was a big part of her life. I enjoyed listening to her talk about all her travels and to looking at her many photographs. She and Herman went to China, Spain, Cuba, Egypt, Greece, and Nicaragua. She and her dear friend, Betty Mueller, went to Portugal together.”

Starting in 2007, Ada and Millie played scrabble every Tuesday. “We were serious,” said Ada, “but not competitive. And we allowed using the dictionary so we could learn new words.”

Paul said about his mother, “I saw her almost every day for the last 8 years of her life and I got to know her in a new way. We would go to lunch or dinner every weekend. Our roles reversed as she needed more help and it was a new relationship for both of us. We became very close all over again.”

Millie’s life was shaped by the events of her century and she understood what that meant and felt it was her responsibility to make the world a safer and more just place for everyone. She was an optimistic person. She knew how she wanted to live her life and she lived that life, expressing her humanitarian philosophy, her politics, her enthusiasm and her deep and loyal love of her friends, her family, and her son, Paul Rosenstein, and her daughter, Fran Alexander.

The Santa Monica community will come together at the Broad Stage this Saturday Sept. 24 at 3 p.m. to celebrate and pay tribute to Millie Rosenstein and to rejoice that we had in our community, in the words of Patricia Hoffman, “a great ally and sometimes a great challenge. Millie was strong, feisty and opinionated and sharp to the very end of her life. She lived her beliefs.”