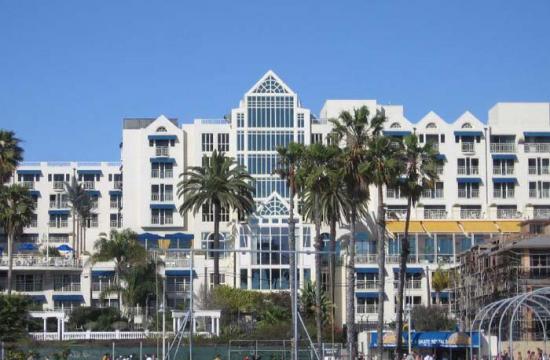 Santa Monica, despite its setting as a beach community with steady weather throughout the seasons, is certainly taking seriously this whole changing of the colors during Fall.

Those colors are green and blue instead of the traditional yellow, brown, red, and orange associated with Fall.

In addition to several Santa Monica landmarks turning blue to raise awareness for prostate cancer in September, the Loews Santa Monica Beach Hotel announced this week it has become Green Business Certified just as Summer prepares to transition into Fall.

Examples of Loews’ eco-friendly deliverables include: exterior lighting that turn of when the sun sets and turn off with proper daylight; providing information to customers via flash drive instead of on printed paper; and organic treatment and spa products at its Ocean Spa & Fitness facility.

In addition to its efforts to be eco-friendly, Loews also participates in a food waste recycling program with the City of Santa Monica. As part of its food composting program initiated in 2007, Loews has donated excess food to local charities such as Meals on Wheels.

According to the hotel, the program helps reduce the amount of waste it sends to landfills.

Other conscientious practices by Loews include purchasing produce from the Farmers Markets around town and from local companies, while also donating excess uniforms, bedding, and supplies to the Ocean Park Community Center.

The SMGBC designation is good for two years; Loews can re-certify in 2013.

Other hotels also maintaining green certifications include the Sheraton Delfina Santa Monica and The Ambrose.

According to backers of the program, the Green Business Certification “is a growing network in Santa Monica that is helping to improve the local economy, and the city’s quality of life.”

In order for a commercial business to be eligible, it must be located in Santa Monica and must employ at least two people. If eligible, a business may be recognized if they “have gone above and beyond in their sustainability efforts” in incorporating “sustainable practices” while significantly reducing their “environmental impact.”

The SMGBC, which is now in its fifth year, is a collaboration between the city, the Convention and Visitors Bureau, the Chamber of Commerce, Small Business Development Center at Santa Monica College, and Sustainable Works, a non-profit environmental education organization.

In addition to Loews’ announcement of its Green Business Certification and several local landmarks promoting the color blue to raise awareness for prostate cancer, the city also plans to move forward with a few “green” development projects in Fall 2011, such as the Ocean Park Boulevard Green Street Program.