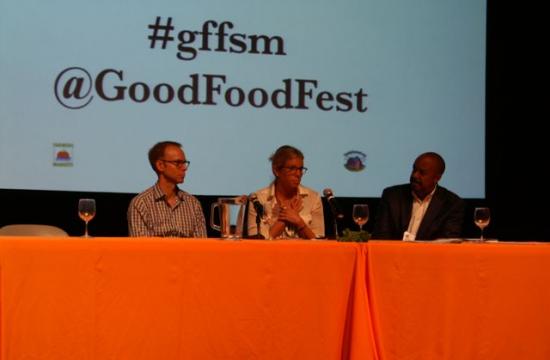 Last week’s Good Food Festival and Conference was a spectacular celebration of 30 years of good food and local farming at the Santa Monica Wednesday farmers’ market.

The celebration was epic in scale, with more than 160 speakers, 100 exhibitors, 36 workshops, and a film screening over a five-day event that was spread out over a few locations including Santa Monica College and Samohi.

There were gardening and canning workshops, chef demos, speaker panels, a farmer financing conference, a gala fundraising dinner by the sea, and a display at Samohi’s art gallery of a collection of rediscovered 1930s Los Angeles agricultural art.

Laura Avery, supervisor of the Wednesday market since 1982, was honored throughout the conference for her contributions to the market’s growth and success.

The market has attracted wide attention as one of the nation’s largest and most diverse.

Avery said the market’s basic philosophy has been, “If you do what’s good for the farmers, everything will be ok. Farmers will bring more food, and customers will come.”

In addition to celebrating delicious food, the conference was a forum for the growing “Good Food movement,” a rising consciousness about healthier diets, the way food is produced and distributed, environmental issues, and the burdens on the planet’s capacity to feed the world’s growing population.

In the same way that public awareness about health risks has cut cigarette smoking rates in the U.S., some proponents of the Good Food movement want to improve the food system through activism.

“People are talking about food, nutrition, the environment, and galvanizing around that,” said panelist Robert Kenner, who directed and produced the documentary film “Food, Inc.” “It feels like the ‘60s, the civil rights movement.”

Keynote speaker Will Allen, a former basketball pro who is an urban farmer in Milwaukee and CEO of the nonprofit group Growing Power, spoke about fixing a broken food system in which “there’s a large section of the population that doesn’t have access to the kind of food that you have at the Santa Monica farmers’ market. Good food access has gone away in many cities. Our work is about social justice, working to change policy.”

According to panelist Neelam Sharma of Community Services Unlimited, the #1 killer in South Central LA is not homicide; it’s coronary heart disease. “You’re three times more likely to die from heart disease there because of overconsumption of the wrong foods,” she said.

Only a small percentage of food is grown and sold directly by small, local farmers.

Food production and distribution have become industrialized and concentrated in a few big companies. For example, 80% of cows are slaughtered by four companies, said Patty Lovera of Food & Water Watch, a public policy nonprofit group in Washington, D.C.

“To be a farmer, you need money to buy land, and you need to be a plumber, mechanic, accountant, marketer, and know how to establish relationships to be successful,” said farmer Al Courchesne of Frog Hollow Farm in northern California to an audience of potential farmers. “Farming is about the hardest thing you can do,” said cookbook author Amelia Saltsman. “When you’re a farmer, you need the heart of a gambler. One hot day or sudden rain can mean your crop is done.”

Several groups represented at the conference are working to improve public health and policy; all are keeping a close eye on the 2012 federal farm bill, a primary food policy bill that will determine crop subsidies, the food safety net for the poor, research spending, and many more policies.

This bill passes through Congress about every five years. Improving school lunch programs, dismal farm labor conditions, the inhumane treatment of farm animals, and reversing the scarcity of farmland, water and farmers are some other issues discussed at the ambitious conference.

The Good Food Festival and Conference was produced by FamilyFarmed, a nonprofit group that has produced similar events in Chicago.