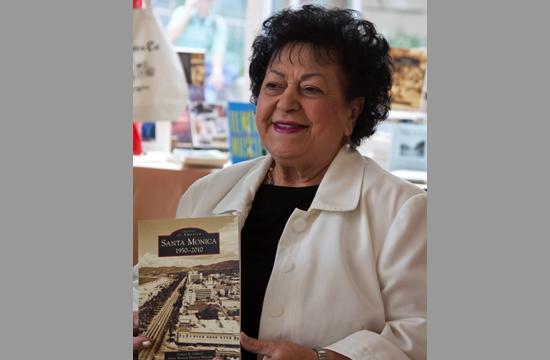 As Gabriel says “There is so much to tell.” Recently at the History Museum, which occupies space attached to the main branch of the Santa Monica Library, Gabriel told The Mirror about the Historical Society and how she founded and nurtured the History Museum into what it is today.

With her late husband, Bob Gabriel of Gabriel Insurance, Louise Gabriel came to California 40 years ago. “We loved Santa Monica,” she said.

In 1975, Louise Gabriel, who was then chair of the Women’s Counsel of the Santa Monica Chamber of Commerce, served on the Historical Activities Committee for the Centennial Celebration. This was when she and some others founded the Historical Society with former mayor Clo Hoover as its first president. Gabriel’s committee planned the centennial exhibit at the Santa Monica Civic Auditorium.

“There were over a hundred volunteers and I made costumes for them at Santa Monica College,” said Gabriel. She also oversaw the fitting of a gown for May Sutton Bundy, the first woman to win the tennis championship at Wimbledon, who rode in the Pasadena Tournament of Roses sitting atop a Santa Monica 100th Birthday cake float.

During the next 10 years, the fledgling Historical Society held events, such as essay and art contests in the local schools, while Gabriel collected historical objects and memorabilia. “The collection was stored in a rental house that Bob and I owned,” Gabriel explained. “I thought it was time to share it with the public.” She discussed it with her colleagues who loved the idea, but were unable to help “because they were all employed full time.”

Louise Gabriel had such passion for her idea of a museum that she resigned from several of the boards she had been serving on in order to have time to work on the search for a location–and funding. She kept adding to the collection while Bob Gabriel, the official co-founder with his wife, looked for funding sources. For three years they struggled, with only $20,000 in the Society’s treasury to work with.

When they were finally able to create the History Museum in 1988, Gabriel recalls “The first location was in the old Sponberg Department Store” (on the former Third Street Mall, now the Promenade). It wasn’t big enough and the Museum soon was moved to an industrial building at 20th Street and Colorado Avenue. This site became the home for the Sony complex. Another location was found in a storefront on the Promenade again. But by the time they were settled in, “The rent was increased to three times what it had been. We couldn’t afford it.”

Fortunately, the Gabriels were able to find a new location with the old Family Service Building on Euclid Street. For 20 years this building housed the History Museum and its growing collection. “It was so wonderful to us. They kept the rent affordable.

“While we were there, the city informed us that they would give us space in the new library. We had a capital campaign to raise funds. My husband chaired and raised a million and a half dollars. We were a few thousand short so we cut back on some of the things we had planned.” The Santa Monica History Museum opened in October 2010.

Visitors to the Museum will find that it contains several sections: a gallery for changing exhibits, and sections devoted to specific themes such as marine life artifacts, the role of airplanes in the city, the local press (an exhibit about the Santa Monica Outlook newspaper that folded in 1998), and activities on the beach. There is an antique player piano and items of antique furniture. Docent tours are available for schools.

Gabriel’s frequent articles about Santa Monica history for local publications led to the writing of her two books. “We were contacted by Arcadia-they do this kind of publishing about cities, doing a book for each city,” Gabriel said. It took her about a year and a half to write and assemble each book.

“Early Santa Monica” documents the city’s development and early years through historic photographs. This year’s companion book “Santa Monica 1950-2010” is about “what Santa Monica is,” featuring more photos and commentary, divided into sections on sights to see, dining around town, community pillars, celebrities, organizations, businesses, hotels, churches, and sights and sites of sheer beauty. “I tried to put things in there that people did not know about,” said Gabriel.

Louise Gabriel has worked tirelessly on the History Museum but her work is hardly done. “We’re dependent on the community for support.” The Museum receives no funding from the city and donations are always welcome but “we always need loads of volunteers” for tasks such as cataloguing and research.

Gabriel also wanted people to know that the Santa Monica History Museum has “the biggest collection of local history of any museum.” She noted that because of its location adjacent to the library, many people have not noticed it yet and more people need to know that it is there—for them. “This is a museum for the community–for the people.”

Louise Gabriel’s books may be purchased at the Santa Monica History Museum at 1350 Seventh Street, open Tuesday and Thursday from 12 p.m. to 8p.m. and Wednesday, Friday and Saturday from 10 a.m. to 5 p.m.

To receive an order form, contact Mary Pat Cooney at the museum, phone 310.395.2290. All proceeds go to benefit the museum.