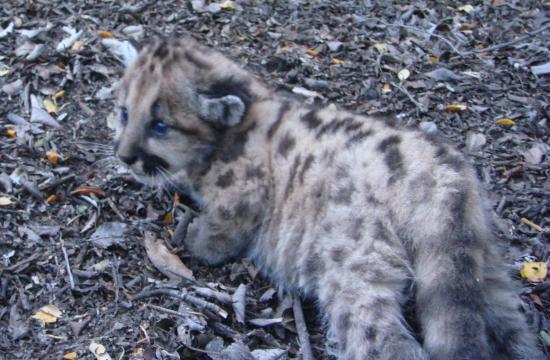 On early Tuesday morning, one of the mountain lion kittens born in the Santa Monica Mountains in May last year was hit and killed while attempting to cross I-405 just south of the Getty Center southbound on-ramp.

The 15-month-old mountain lion’s movement was being followed via radio telemetry equipment as part of a decade long National Park Service mountain lion study in the Santa Monica Mountains.

The mountain lion had been tracked since it was three weeks old.

Earlier this summer, the mountain lion kitten departed from his mother’s home range in Malibu Creek State Park and slowly began making his way east through the mountains.

There are two other male mountain lions with GPS collars in the Santa Monica Mountains.

It is possible that this mountain lion kitten was attempting to disperse out of the Santa Monica Mountains to find unoccupied open space.

Previous mountain lion tracking has shown that individual male mountain lions frequently move throughout the entire Santa Monica Mountain range, from the 405 to Camarillo on a regular basis.

Freeways are a known significant barrier to wildlife crossings in the Los Angeles area and other urban centers around the country.

Caltrans, in partnership with numerous local, state, federal and non-profit organizations is working to identify funding sources and suitable wildlife crossing locations along the 405 and highways 101 and 118 to construct wildlife crossings that would facilitate wildlife movement between the Santa Monica Mountains and other protected open space in the Santa Susana Mountains and Los Padres National Forest.

“Investing in connected pieces of parkland and constructing wildlife crossings along major freeways around Los Angeles is essential for long term mountain lion survival in the Santa Monica Mountains,” said park superintendent Woody Smeck. “Mountain lions must be able to move freely between large park lands with suitable habitat throughout the course of their daily movements, as well as exchange genetic material to prevent inbreeding in specific parkland areas like the Santa Monica Mountains.”

The National Park Service began studying mountain lions in Santa Monica Mountains National Recreation Area in 2002. A total of 21 mountain lions have been tracked via radio telemetry and GPS collars in that time.

In addition to studying mountain lion movement, a genetics study is also ongoing to discover indications of possible inbreeding among the mountain lion population in the Santa Monica Mountains.

There has only been one documented successful mountain lion crossing in the study for either of the freeways that surround the Santa Monica Mountains;

One mountain lion crossed highway 101 in early 2009, and has lived in the Santa Monica Mountains ever since. It is father to the young mountain lion who was killed on Tuesday.