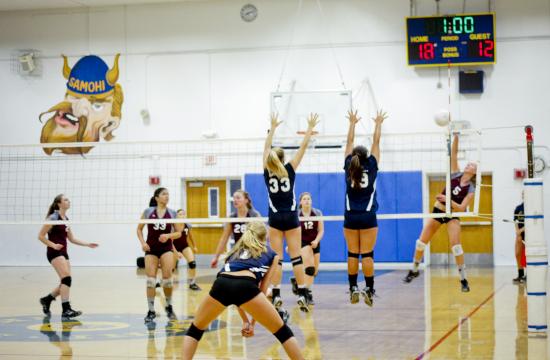 It was uncharacteristically scary in Game Two.

A 1-10 Torrance Tartars team was up 18-16 against the No. 3-ranked SaMoHi Lady Vikings in the second game of their volleyball match.

SaMoHi did win Game One, but this was supposed to be a sweep… and it would be.

Three ace serves from Greta Schmittdiel, five team kills and one unforced error later, SaMoHi was up two games to none.

“We had dips of not keeping our discipline, but for the most part, we had a solid game and stayed at our level,” said senior middle blocker Abby Southam.

The third game went to SaMoHi convincingly and Tuesday’s contest ended with the Lady Vikings prevailing 25-16, 25-18, 25-13.

SaMoHi coach Liane Sato said she is not worried because this is still the beginning of the season.

“We definitely still need to find our rhythm. We’re still working together as a team, figuring out our strengths and weaknesses,” Southam said, “but I think it’s coming along and I think we’ve been making good progress.”

The season continues next Tuesday as SaMoHi hosts El Segundo.

Keep Up-to-date With The Mirror: