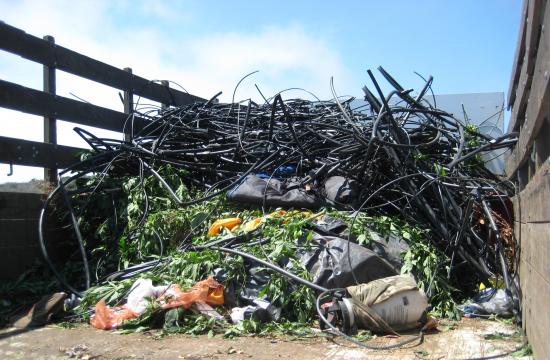 “This cultivation site had all the characteristics of a Mexican drug trafficking organization,” said Evan Jones, Chief Ranger for Santa Monica Mountains National Recreation Area. “Heavy use of chemicals, aggressive clearing of native vegetation and a very labor intensive grow site are all indicators typically seen of such an operation.”

The growers had placed irrigation hose in a nearby creek to water the plants, installed traps for catching rodents, used copious amounts of chemical fertilizers, and relied on open flame propane grills for cooking.

This is the second marijuana cultivation site found at Santa Monica Mountains National Recreation Area this summer. The other was found in Zuma Canyon.

The National Park Service, California State Parks, and Mountains Recreation and Conservation Authority actively look for marijuana cultivation sites throughout the Santa Monica Mountains due to the natural resource damage they produce and the threat to public safety they pose.