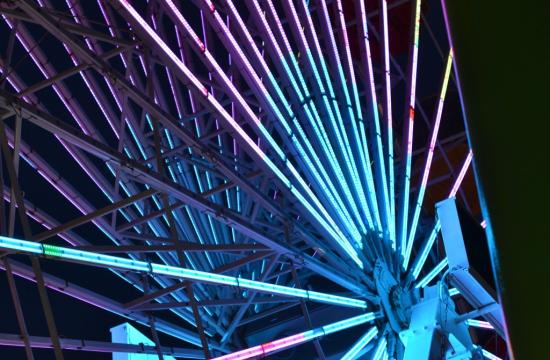 The Ferris wheel at Pacific Park on the Santa Monica Pier will turn blue this weekend, starting tonight to raise awareness for prostate cancer.

Second and Fourth Streets in Santa Monica have been lit up blue during the evening since Sept. 12, the start of the awareness week, and will continue with the initiative through Sunday night.

Prostate cancer is a major American health problem that has long been misunderstood, and too little spoken of, among men and their families.

“Prostate cancer is to men what breast cancer is to women, yet open dialogue of the disease lags behind other cancers,” said Dan Zenka, senior vice president of communication at the Los Angeles-based Prostate Cancer Foundation (PCF).

Ironically, Zenka was diagnosed with advanced prostate cancer two years after he began working at PCF.

“We are grateful to the City of Los Angeles, Downtown Santa Monica, Inc., local property owners and Blue September for their support in this effort. It is our hope that Angelenos will see more blue every September moving forward,” he said.

This year, more than 240,000 new cases of prostate cancer are projected to be diagnosed in the U.S. and more than 33,000 American will die as a result. Worldwide, more than 16 million men and their families are challenged by prostate cancer.

Other landmark buildings turning blue in September include:

The September campaign represents a partnership with PCF and Blue September, an organization designed to educate American men about prostate cancer and encourage routine screenings.