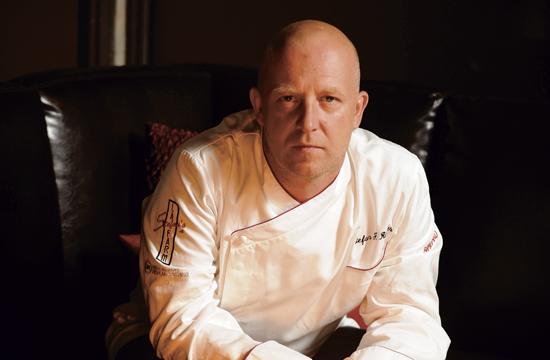 The Mirror wraps-up its two-part interview from last Friday’s edition with Stefan Richter, of Stefan’s at L.A. Farm. Richter gained much recognition for his cooking style and expertise on Bravo’s “Top Chef” reality cooking show where he was runner-up after creating an assortment of stunning dishes. He took time out of his busy schedule to speak with The Mirror.

Do you have a cooking philosophy?

Richter: Keep it simple. People want to eat what they know and what they like and the biggest seller here for lunch is the turkey burger and chicken potpie. I sell 30 to 40 a day. Do I put my own twist on these dishes? Absolutely.

What’s your biggest challenge in running a restaurant?

Richter: My biggest challenge is people’s expectations. Everybody is a food writer or a blogger and it’s very hard to satisfy everyone. Sometimes in this economy it’s hard to plan, like if it’s a Sunday night and you have 25 reservations, how many waiters do you schedule? Two, right? Maybe two bus boys and a bartender. But what if one night you have 90 reservations, service might not be as good as you would like, and people get freaked out about it and then write nasty things. If you order a medium rare steak for $22 bucks and it’s medium, just eat it. How bad could it be? It’s not that big a deal.

What do you think about all these food trucks?

Richter: I wouldn’t do it. I think it was great in the beginning because it was a cash business. People drove their food trucks around and they made a nice living. But, now there are 450 lunch trucks in a three-mile area so I don’t think anyone is making that much money and I’m glad I didn’t buy one.

Do you think it impacts the restaurant business?

Richter: I don’t think so. Do you really want to have lunch standing on the corner of Third and Alameda eating a taco? I wouldn’t and 99 percent of people wouldn’t want to either.

Are there any restaurants in Santa Monica that you particularly like when you eat out?

Richter: I don’t go out much because it’s hard for me to go out. It’s like you’re in the restaurant business and do you want to do the same thing when you’re off. But, I do go to places like Gjelina’s on Abbott Kinney. It’s very cute and well done and I love going there. I also love my In-and-Out Burger, and Gilbert’s El Indio Restaurant on Pico, a Mexican joint that’s been there forever. I go to Rae’s for breakfast for their biscuits and sausages. I like to eat and it doesn’t have to be fine dining. I’d rather go to a good taco joint instead of having a mediocre five-course meal.

How did being runner up on “Top Chef” affect your career?

Richter: I think being on television helped a lot. It was the best PR you could get. I now have two restaurants, a catering company, and three delis – one is here behind L.A. Farm in the building, Stefan’s Deli at IMAX, and Stefan’s Café across the street.

How often to you go back to Finland?

Richter: I go back five times a year. I have a restaurant there and a 40-acre house on the water. I like to hunt and fish in the summer and I spend time on a little farm where I get to relax. On holiday, I like to surf and snorkel in Australia and ski in Switzerland.

Earlier you said that coming up with recipes is like a marriage in that you have to work at it and play (I’m assuming he meant the ingredients.) Have you been married?

Richter: I’ve been married twice to the same chick.

Is it difficult to maintain a relationship in your line of work?

Richter: I cook every day. I go to the restaurant at 7 a.m. in the morning and leave around 10:30 p.m at night. And that’s pretty much my life. I’m 39 and still single. You know how it is when you travel. You’re just not home. As soon as someone asks for a drawer in my house, that’s it for me because this is Stefan’s house and all the drawers are Stefan’s.

Do you think you’ll ever want to have children or do you think that would be too demanding on your time?

Richter: I would have children with my last girlfriend, but my train is up and I think I’m done.

What about these men who have kids later in life?

Richter: I wouldn’t want to be having kids when I’m 60. I have a hard enough time running myself and I’m only 39.

What do you think the hardest challenge is in keeping a relationship together?

Richter: Keeping it interesting. Just imagine that you’re locked up in a room with your best friend for three months and then think about marriage – being locked up with the same person for 40 years – that’s a long time.

What is the age range of women you date?

Richter: I like older women. Young men don’t know how good women get with age. They’re like fine wine. They get better and better.

Before you go to sleep at night, do you think about the problems you faced that day?

Richter: I’ve learned something over the last three or four years and that is if I don’t let it go after work, I’m going to drop dead. With my fire pit burning in the back yard, and the smell of smoke, I unwind with a nice glass of wine or a good scotch and I’m a happy camper