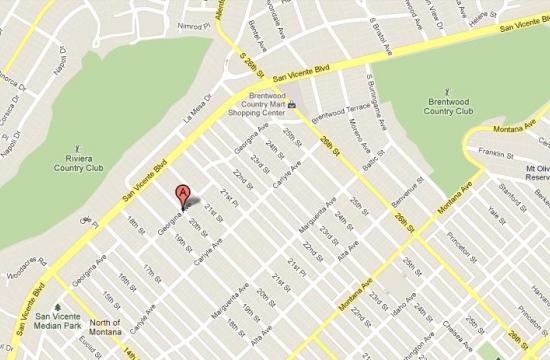 An 84-year-old Santa Monica woman motorist this morning struck and injured actress Reese Witherspoon who was jogging in the area of 20th Street and Georgina Avenue in Santa Monica.

At 11:14 a.m., officers from the Santa Monica Police Department responded to the area regarding a traffic collision involving a motor vehicle and a female pedestrian who was jogging.

The initial investigation revealed that the driver of the vehicle, an 84-year-old female resident of Santa Monica, was traveling southbound on 20th Street and struck a female pedestrian that was jogging westbound on Georgina Avenue at 20th Street within an unmarked crosswalk.

The pedestrian was subsequently identified as Reese Witherspoon.

Witherspoon suffered minor injuries and was transported by ambulance to a local hospital for medical treatment.

A SMPD statement said the driver of the vehicle was interviewed at the location and released after being cited for failing to yield to a pedestrian in a crosswalk, a violation of California Vehicle Code section 21950(a).

In 2005, Witherspoon received worldwide attention and praise for her portrayal of June Carter Cash in Walk the Line, which earned her an Academy Award, Golden Globe, BAFTA and Screen Actors Guild Award for Best Actress in a Leading Role.