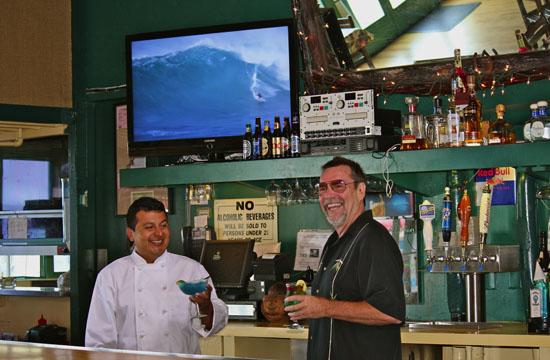 Relax at day’s end inside Rusty’s Surf Ranch on the Santa Monica Pier, surrounded by a motif of surfboards decorating the walls, and watch the surf and sports screens above the bar or grab a seat outside to people-watch while enjoying cocktails and crab cakes.

The tempo begins to change as the sun begins to set.

This is when many of the tables and chairs inside the indoor dining area begin to disappear and a stage for the night’s bands is rolled out, kegs are tapped, and heating lamps are turned on to warm the tables on the outside patio area.

By nightfall, the place turns into a nightclub and is bumping with live bands and locals looking for a fun time in Santa Monica.

Russell “Rusty” Barnard runs this mom-and-pop style beach restaurant on the Santa Monica Pier and his story is one of success.

Barnard follows the surfer’s code in all aspects of his life including business. All surfers know to trade off with the waves so everybody gets a chance to surf.

Barnard has just taken this code a step further and infused it into his business by letting more and more local bands perform at his restaurant.

“I get a real satisfaction off of giving others that opportunity,” Barnard said.

Barnard has been in love with the Santa Monica Pier, food, and music his entire life. It’s only natural that he combined his passions into a restaurant that not only has quality food and drink all day and night, but also live bands after dark.

“I’ve been in love with the Santa Monica Pier since I was a kid and I have always been drawn to it,” said Barnard. “My dad would take us down here. There were five of us kids and he would throw us in a station wagon. I remember wonderful family times here. I would ride the carousel before it had rims.”

Rusty’s was formerly the Crown and Anchor until a storm hit the Santa Monica Pier in 1994.

Barnard used this opportunity to start a restaurant right after the pier’s rebuilding in the wake of the storm.

The Pier Restoration Company asked if he would take the space and open a restaurant. The 20 year lease would only be guaranteed if Rusty’s opened on July 1. Barnard was told this in May.

“We didn’t even have our liquor license yet,” Barnard said. “If you don’t have drink, it ain’t much of a bar.”

Barnard didn’t let that stop him. He was quickly approved for a liquor license that gave Rusty’s the opportunity to move to phase two of the dream: live bands. “I wanted to compete with the venues in Hollywood,” said Barnard. “I wanted to find local bands that were having trouble finding a place to have their say. I have been here seventeen years and we have a sort of nurturing environment. We treated everybody like an entertainer of note” and ultimately,“we fell in love with better business.”

A “better business” model seems to be the key to Rusty’s success.

“Rather then having a fairly well known band that we were lucky to get fifty to seventy people to see, I decided to do things differently,” said Barnard. “Instead, I identified three bands to play Friday and Saturday nights that could each draw fifty people.

“These were bands that didn’t have a chance to play somewhere else and were quality performers with good acts.”

Young bands with names like PapaFish, Me and He, One High Five, and Down Home were given their chance to shine over and over again. During a competition that spanned three months, 18 bands battled to become the top three winners and advance to the Twilight Dance Series stage.

“I’m thankful for Rusty allowing us to do it,” said singer Kryss Deetch whose band The Bad Bad Things was runner-up in the competition. “It was a hell of a good time.”

“We lost to the Bad Bad Things,” said Nancy Rae Pride of PapaFish. “The night we lost was pretty amazing. I didn’t see one person not wiggling their head and there were a lot of people at our show singing along to our songs. It felt really good.”

PapaFish has gone on to play two more shows at Rusty’s Surf Ranch and has brought large crowds to Rusty’s even since losing to The Bad Bad Things.

“I build relationships and gave bands an opportunity to perform in a real environment with a real club,” said Barnard.

“He (Rusty) is a real music fan,” said Arif Hodzic of the Twilight Dance Series-winning band Olio. “He loves original bands. There are so many places that don’t support your thing. He likes people expressing themselves.”

Hodzic went on to praise Barnard for giving Olio “a vehicle and avenue to get out there.”

Olio originally lost to the band One High Five in an early round and was awarded a consolation show that eventually led the group to win the Battle of the Bands competition and a large cash prize.

1) The Marinated Skirt Steak, is a solid flank of mouthwatering meat with a grilled and peppered outside and a juicy red inside-provided with Chimichuri sauce, flavored with garlic, cilantro, vinegar and parsley, and served atop a sturdy counterpoint of whipped mashed potatoes generously garnished with hand-cut onion strings deep-fried in beer batter.

3) Chicken Nachos, this is a bar favorite and meal in itself. It has melted jack cheese over homemade tortilla chips imbued with black beans and guacamole with sides of sour cream and an assertively fresh salsa.

4) Linguini Pasta with Shrimp, is a dish fun to slurp before taking breaks to eat the perimeter of succulent shrimp basking around the edges of the plate. Don’t forget to fork in some uniquely flavored capers amidst the noodle-filled pasta dish.

5) Blackened Ahi Tuna, this is a thick and lightly seared fish steak served with a tangy mango salsa and lemon wedge, a broccoli zucchini tomato salad, and a ball of white rice.

Fresh Louisiana-Style Crab Cakes, these delights are served with breaded onion strings snap up a good catch fried with hints of cilantro and chives to dunk in a Cajun sauce spread along side some lightly oiled garden greens decorated with extra thin carrots.

A cool Patron Anejo (Baja Gold) Tequila Margarita with pineapple, lime juice, and a splash of Triple Sec will quench any thirst to wash down the savory goodness of your favorite cuisine.

A Blue Iguana made with tequila and Blue Curacao is sure to have you dancing on the floor once the bands kick in and night rolls around.