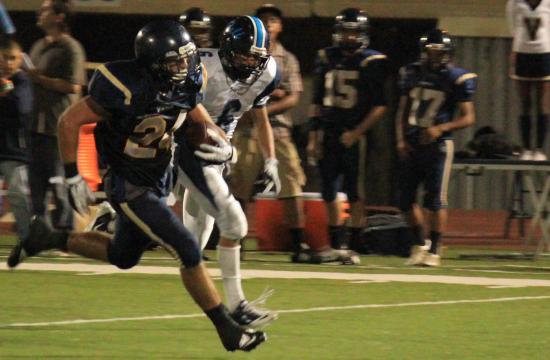 The Santa Monica High School Vikings (2-0) beat up the Palisades High School Dolphins (0-2) 33-15 Friday night, effectively shutting down the Dolphins wishbone offense and sending Palisades quarterback Nathan Dodson limping out of the game by the middle of the fourth quarter.

“I’m excited for it (the win),” said Garcia after the game. “I give all the credit to my line and my team. I just do what I do and run the ball.”

The game began with the Dolphins putting up points quickly on their first drive with Arte’ Miura scoring from 15 yards out, beating the Vikings defense to the outside.

“We knew it was going to be tough to stop that wishbone offense,” said Garcia.

SaMoHi struck back the next series when Garcia broke free with the ball, breaking a number of tackles en route to his 45-yard scamper into the end zone to tie the score at 7-7.

After this it was mostly Vikings celebrations as Garcia scored again on an 85-yard screen pass with 8:23 in the second quarter and added his final touchdown early in the fourth quarter on a 70-yard run.

The Dolphins made it interesting in the fourth. Fullback Mylz Blake galloped through the middle of the line and spun to the outside to score. Palisades tacked on two more points on the conversion making the score 15-26.

But the Dolphins could not convert a fourth down on their next possession. SaMoHi tacked on one more touchdown when Christian Salem chucked a long ball to Sebastian Larue for the insurance.

“It was a hard-fought game. There was a lot of emotion,” said Vikings head coach Travis Clark. “(Palisades) came out and played a tough game tonight.

“I tip my hat off to my guys, though. They withstood that threat. That’s a test to those guys, having confidence in each other, playing hard. It’s a good game.”

SaMoHi will host Canyon next Friday night at Corsair Field at 7 p.m.