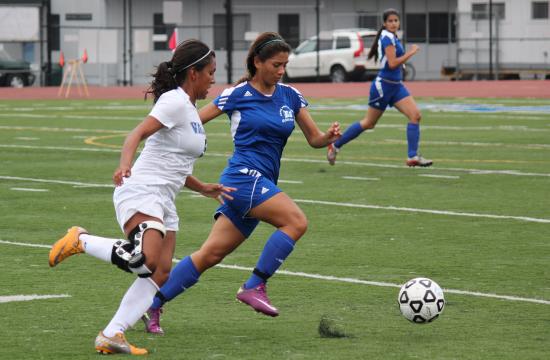 While the Lady Corsairs (0-4) were able to hang with defending state champion San Bernardino Valley until the final whistle, the 2-1 loss to the Lady Wolverines (6-1) certainly left SMC to ponder what could have been had any of their missed opportunities been converted.

Despite eight shots on goal – including one that hit the crossbar in the eighth minute – the Lady Corsairs were scoreless until the 64th minute, when defender Liz Cveyich assisted midfielder Sarah Barrington on a laser beam shot that caught the back of the net for the game’s equalizer.

Unfortunately, Breanne Dominguez’s free kick goal from the left side in the 72nd minute arched just over the outstretched fingertips of Lady Corsairs goalkeeper Alisa Sheldon to give San Bernardino Valley the victory.

It was the second such goal Sheldon was just an inch shy of swatting.

In the 44th minute, forward Mariela Ortega fired a shot straight away from about 30 yards out, bending the ball over Sheldon to give the Wolverines a 1-0 lead at halftime.

“I thought in the first half we really took it to them,” SMC head coach Aaron Benditson said after the match. “I thought we were the better team by far, and unlucky to come out of that half having to concede a goal in the last two or three minutes.”

During much of the first half, the Lady Corsairs were able to keep the ball predominantly in their own zone and had several scoring opportunities.

The Lady Corsairs would have another three or four solid scoring opportunities before finally scoring the equalizer about midway through the second half.

“We had some opportunities to score some goals. If you don’t take your opportunities in soccer, it’s going to come back and bite you in the end of the day,” he said.

SMC returns to the soccer field again on Tuesday at 3 p.m. for a home match against Ventura College.