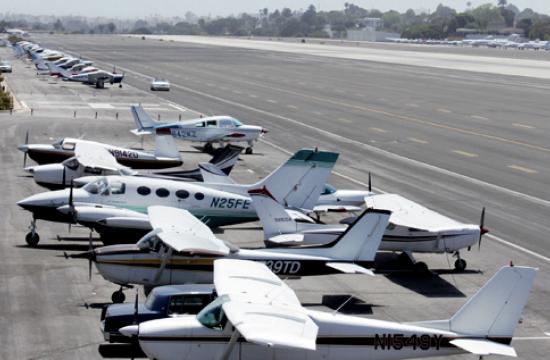 The Santa Monica Airport Commission will conduct a flight school workshop tonight, Sept. 26 at 7:30 p.m. to discuss flight training activity at Santa Monica Airport and at other airports throughout the region. The public is invited to attend to participate in a Q&A session at the workshop, which will be held at the Santa Monica City Council chambers, located at 1685 Main Street.

The workshop is being conducted as part of the Airport Commission’s continuing effort to inform and educate the public regarding the operation of the Santa Monica Airport.

The agenda and format of the meeting was developed by Airport staff working in conjunction with an ad hoc committee of the Airport Commission and representatives of the Santa Monica Airport flight schools.

The flight school workshop will include an overview and introduction by Santa Monica Airport Director Bob Trimborn.

Trimborn will present a review of the current flight school operations at Santa Monica Airport and discuss flight school activity at other airports in the Southern California region.

His presentation will be followed by a discussion regarding flight school operations, flight training, and other related information.

Trimborn said the Airport Commission holds regular workshops throughout the year on topics such as noise operations and environmental issues, but this would be the first workshop dedicated to flight schools.

“It’s an education and awareness workshop so that people will understand what flight training is about, and jurisdiction issues related to flight training,” Trimborn said. “Flight schools are part of the Airport Commission’s education program to educate people on the operation of the airport.”

Trimborn said he did not know if Monday’s workshop would attract more people than usual following the Aug. 29 single-engine Cessna crash in Santa Monica flown by a student pilot.

“We could have more than normal, I’m not sure,” he said. “We don’t have any polling that’s going to tell us how many people are going to be there.”

Following, these presentations will be a Q&A session, moderated by Airport Commissioner Richard Brown, in which the public is invited to participate.

Questions must be related to the information and topics presented and/or discussed during the workshop presentations.

Persons may choose to either submit up to three written questions to staff; or submit a chit and request to speak.

Anyone chosen to speak will be limited to three minutes.

According to Trimborn’s report compiled for Monday’s workshop, flight training has most likely been occurring at Santa Monica Airport since its founding in 1917.

During the early years, flight training was given in biplanes and did not have the same regulatory structure that currently exists in the industry today.

Prior to WWII, the US Army Air Corps operated a flight training facility at the Airport. Flight training virtually came to a halt during WWII when the Airport was used primarily by the Douglas Aircraft Company to build aircraft for the war effort.

Flight training grew exponentially following the war and peaked in the mid-to-late 1960s when several major flight schools (with more than 30 aircraft each) operated on the south-side of the airport.

Overall aircraft operations at the airport also peaked during this period reaching over 356,000 takeoffs and landings/year (three times the current operational level) – with many of these being flight school-related operations.

Staff interviewed several pilots who flew at SMO during this time period.

They said that it was not uncommon to have 20-plus aircraft conducting take-offs and landings during peak hours.

Flight training activity began to diminish during the 1980s, with the exception of the dot-com era in the late 1990s, to its present level.

Currently there are six flight schools of varying sizes at Santa Monica Airport.