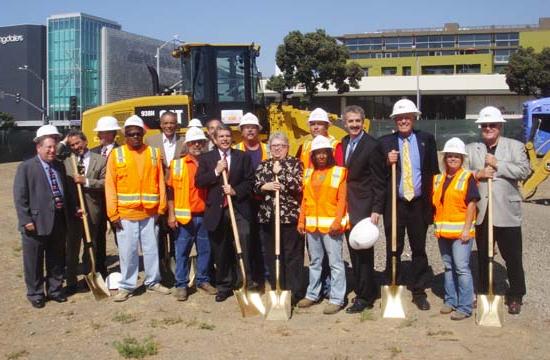 Santa Monica Mayor Richard Bloom said the light is finally at the end of the tunnel for the Exposition Light Rail Line’s arrival in Santa Monica. With a groundbreaking ceremony held Monday at the location of the terminus station at Fourth Street and Colorado Boulevard, council members took up a pair of agenda items on the Expo Line at its Tuesday meeting.

During the meeting, the council approved in a six-to-zero vote the Master Cooperative Agreement with the Expo Metro Light Authority. Accordingly, the agreement would allow construction of Phase 2 of the light rail to be built through Santa Monica.

Council members also approved staff’s track alignment recommendations with the direction to “minimize fencing (in order to) achieve complete streets,” allowing the light rail system to be much more integrated with the streets it will travel on when not elevated.

If all goes as planned, the Expo Line will be fully operational within Santa Monica in a little more than four years.

However, a group of local residents may be derailing the Expo Line’s completion of Phase 2 through Santa Monica.

Currently, there is a pending lawsuit with a coalition of homeowners’ groups challenging a Superior Court ruling favoring the Metro Authority with respect to the Final Environmental Impact Report (FEIR).

Rick Thorpe, CEO of Metro Authority, said they were still moving forward with design plans and preparations for construction while awaiting an appeals court hearing date concerning the FEIR.

“We’re cautiously optimistic that this will all be resolved by the time we enter the construction phase of the project,” Thorpe told council members. “We haven’t yet defined exactly how the construction will occur.”

With construction still very much in the balance even with the groundbreaking and joint council actions, both the Metro Authority and elected officials remained optimistic the light rail would arrive into Santa Monica as early as the end of 2015 or in early 2016.

Phase 1 of the Expo Line connects downtown Los Angeles to Culver City, which could be ready for passenger service later this year or early next year depending on the conclusion of train testing.

Phase 2, which includes portions of Culver City, is 6.6 miles in length and is expected to cost about $1.5 billion. Thorpe said a significant chunk of funding will come from Measure R, a half-cent sales tax approved by Los Angeles County voters.

Thorpe added that quarterly meetings are held with the community as a whole to discuss the Expo Line’s progress, while individual meetings with business owners and residents directly impacted by the light rail construction, development, and operation are much more frequent.

One resident, Crystal Anderson, spoke to council members during the Sept. 13 meeting about the Expo Light Rail. Although supportive of the new train system coming into town, she was concerned about the location of the system’s maintenance yard in the Pico neighborhood.

“I am excited to have a train in our city again, but I feel hard that we got the short end of the stick to have the maintenance yard in our neighborhood and a level crossing with three tracks,” she said, adding that the area surrounding her residence would be likely to experience the heaviest Expo-related traffic.

Still, Anderson was hopeful of the development of a buffer zone as well as the willingness of Metro and city officials to hear potential complaints spawning from the light rail line bisecting Santa Monica.

Council member Kevin McKeown presented several photographs of light rail and train systems in other locales, both in the United States and abroad, that featured the respective system’s cars running within the context of the streets with minimal or no barriers.

As pointed out, staff was directed to look into how the Expo Line could run through Santa Monica without barriers in order to maintain complete streets.

At Monday’s groundbreaking ceremony, Pam O’Connor, Santa Monica Council member and Expo Board Vice Chair, said the Expo Line Project was many years in the making.

“It’s a great thing,” said O’Connor. “It’s connecting our Santa Monica to the rest of Los Angeles County with safe, reliable rail transportation. It’s going to connect our institutions like Santa Monica College, our hospitals, our beach, our other cultural institutions, all the convention and visitor facilities we have in Santa Monica with the rest of the county.”

L.A. County Supervisor and Expo Board Chair Zev Yaroslavsky said the Expo Line marked the first rail transit line connecting the Westside to the rest of L.A. in more than half a century.

“It’s not going to solve the traffic problems of the Westside, but it’s going to give people an alternative to being stuck with the problems on the Westside,” Yaroslavsky said.

Furthermore, the project is putting more than 9000 people to work, Yaroslavsky said.

More information on the project is available at www.BuildExpo.org.