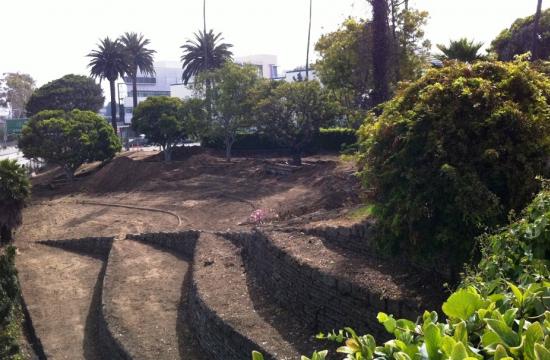 Large trees, including the extremely large Ficus rubinginosa “Three Amigos” trees, have been boxed for relocation on the park site.

While most of the boxed trees will be relocated within the park site, seven of the these trees were carefully transported across the street for planting on the sloped site adjacent City Hall. Parking lot surface material has been scraped, piled and is being hauled off.

Overgrown ivy and debris on the sloped site between City Hall and the I-10 Freeway have been cleared and a row of boxed trees placed at the top edge of the slope.

Once the site was cleared, old stone wall terraces were revealed.

A native meadow seed mix ground cover with slope stabilizer will be planted in this area.

Palm Trees to be Moved

The 17 non-native Washingtonia robusta palm trees currently located on the future park site will be relocated to City of Santa Monica Woodlawn Cemetery, Mortuary and Mausoleum starting on Monday, Sept. 26.

Four to five palms will be planted per day until the work is complete.

All other palm trees will remain on the park site and will not be moved.

The future park is located within the Coastal Zone and is therefore subject to California Coastal Commission oversight.

The Washingtonias will be scattered at various locations inside the cemetery grounds including along Maple Avenue and 15th Street.