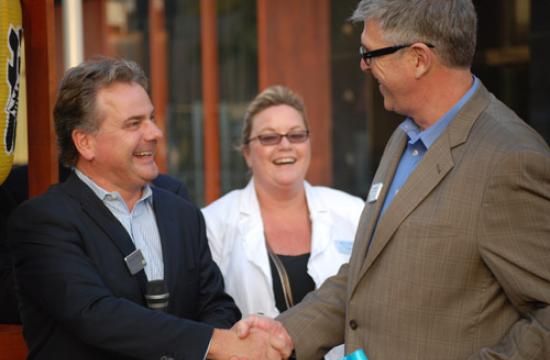 Richard Chacker and Gregory Day have been added as new board members, and Ellis O’Connor, Jeffrey Jarow, Fabian Lewkowicz and Raphael Lunet have been installed to the board of directors as officers.

“We are pleased to welcome such a diverse and knowledgeable group of members and officers to the Board of Directors,” said Misti Kerns, president and CEO of the Santa Monica Convention & Visitors Bureau. “Each one brings a unique set of qualifications and experience to the board and we look forward to working closely with all of them as we continue to position California’s most celebrated beach city as a premier destination to both domestic and international travelers.”

Richard Chacker is the newest board member for the Santa Monica CVB. Richard and his business partner started Perry’s in 1976 on the Santa Monica Beach with two concessions. Over the course of 36 years, Perry’s has increased to eight locations in Santa Monica, Venice and the Santa Monica Pier, offering Cafés, food, beach rentals, the Legends Bike Tour and sophisticated Beach Butler service. Perry’s, a family operated business, has helped shape and influence the beach culture for the last 36 years. It is one of the longest established businesses in Santa Monica. Richard has been intimately involved in a variety of community groups and is a board member of the Chamber of Commerce and its business round table group.

The second new board member for Santa Monica CVB is Gregory Day, General Manager at Santa Monica’s iconic beachfront resort Shutters on the Beach since 2008. Gregory Day oversees the daily operations for the property, elevating service levels, successful room promotions and marketing campaigns, as well as the resort’s food and beverage programming at destination restaurants One Pico and Coast, introducing a new Wine Spectator award-winning wine program, as well as creating multiple partnerships with some of the world’s top lifestyle brands during his four-year tenure. Mr. Day has over 20 years of experience in the luxury hotel market, holding leadership positions at Fairmont Hotels & Resorts destinations including San Francisco, New Orleans, and most recently at The Fairmont Royal York, Toronto. Prior to his 14 years with Fairmont, Mr. Day headed aspects of the food and beverage divisions at each The Lodge at Pebble Beach and the Inn at Spanish Bay, of Pebble Beach Resorts in Northern California.

Ellis O’Connor has been announced as the Chair of the SMCVB board of directors. Ellis is an Asset Manager/Owner’s Representative for the MSD hospitality team and works to oversee MSD Capital’s portfolio of prominent hospitality assets, which includes the Fairmont Miramar Hotel & Bungalows in Santa Monica, where he most recently served as the hotel’s general manager. Additionally, Ellis has worked with Ian Schrager’s Gramercy Park Hotel, Peninsula Hotels and Cunard Hotels and Resorts. Ellis is also a board member of the Santa Monica Chamber of Commerce.

Jeff Jarow has been in Commercial Real Estate Brokerage since 1983, and is currently the vice president of Par Commercial Brokerage. Jeff has been an SMCVB board member since 2006 and will now serve as Vice Chair for the Board of Directors. He is also a board member of the Ocean Park Association, Santa Monica YMCA, Santa Monica Chamber of Commerce and the Main Street Business Improvement Association and served on the Centennial Steering Committee for the Santa Monica Pier’s Centennial Celebration. Additionally, he is on the advisory committee of the Santa Monica Community Gardens. Jeff is highly involved in the local school system and was recently appointed by the SMMUSD to chair the Prop 39 Bond Oversight Committee to oversee Measure BB (school facilities bond voted on in November of 2006) spending of $268,000,000. Jeff also serves with the SMMUSD’s Child Development Services as treasurer for the PTA arm of the District Advisory Committee, and serves as vice president of the PTSA Board at SMASH (Santa Monica Alternative School House).