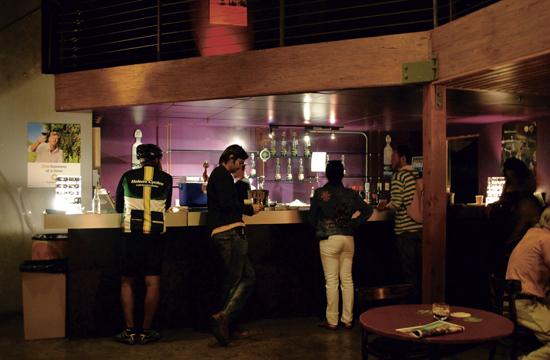 The Santa Monica Pier Partners Lounge is not your typical VIP lounge. There is no cheap wine, groupies, or old velvet draperies. Instead, there is art–and a lot of it.

From the second you walk in, you are sucked in by the lounge’s dim lighting and eclectic artworks on display. The ping-pong table helps, too.

For the first time, Twilight Dance Series sponsors, their friends, affiliates, and Pier employees have an eclectic indoor lounge, all thanks to artists Bree Kristal Clarke, Eli Thomas, and Izzy Holden.

The trio put together the space, which is sandwiched between Rusty’s Surf Ranch and the Pier Carousel, in three days, just one week before the Twilight Dance Series kicked off earlier this summer.

“This was an old venue–everything was exactly intact, exactly how it was left, so when we came here there was so much dust and crap everywhere…we cleaned everything and moved everything out,” Clarke said.

Normally, Twilight sponsors would hang out in a tent behind the stage. However, according to Clarke, they were lucky to get the space.

“We had virtually no budget for this,” Clarke continued. “The three of us really pulled in a lot of stuff – we made stuff, I contacted a lot of artists that I researched that used different materials and found out if they were local . . .I wanted to go with something that felt like you were in someone’s house kind of and also we wanted to change it weekly so if you’ve already been here you can look and be like ‘Oh that’s different.’ ”

The theme of the space is local artists and recycled materials to give it a fun, local vibe.

“First off, we had no cash,” Clarke said. “So we had a massive space to fill and make cool with very limited funds. I came up with a theme just randomly. I said we’re going to find amazing artists and it’s green because that’s what Santa Monica’s about as well.”

Clarke even made the lamps in the lounge herself out of tapes she found when cleaning up the space.

At the entrance, three of Clarke’s photos are also on display. She said there is usually an interactive art piece called “Color Me,” for lounge-goers to do art of their own.

On the main wall, artist Andrew Hem spray-painted an image of a man that is so detailed it looks as if it were painted with a brush. Another artist added a crown while others added tags to the side to complete the look.

Next to it is art that shows off scenes from the Santa Monica Pier and Venice Beach, made by Restitution Press.

In the middle of the space, a giant 50-pound chandelier made out of bike chains, made by artist Caro, hangs for all to see.

Off to the side are pieces of furniture, by artist Borris Belly, made out of street signs.

And upstairs is a dressing room for the bands to get ready and change before they perform.

All the art on display is for sale, which is a bonus for the artists.

“Galleries like the lounge are wonderful for exposure to folks that might not necessarily stroll into art galleries,” said Caro in an email interview. “It’s a wide ranging audience that has the opportunity to see some wonderful art they might not otherwise come across.”

Though it is only open on Thursday evenings from 5:30 p.m. to 10 p.m. for Twilight partners, the lounge still serves as a great place for people working behind the scenes of the dance series.

Artist Eli Thomas said his favorite part about the lounge was its vibe and “the way it looks and how it flows.”

Lindsay Schapiro, a summer intern for a production company that does Twilight concert promotion, said she enjoyed spending time in the lounge.

“I like that it’s inside, first of all, because it’s kind of cold out there,” she said. “It’s a nice place to come in to relax and play some ping pong. The food is great…it’s fun.”

Others, such as Jason Rosen, the lounge’s bartender, said the energy of the lounge is what makes it special.

“It’s a nice, open space, there’s great artwork all over the place, the energy’s really great,” he said.

“Oh and there’s a ping pong table,” he joked. “It’s been fun bartending, it gets better every week.”

Though a restaurant recently purchased the space, Clarke said they will be able to keep the lounge open until the end of the Twilight Dance Series.

“It’s cool that we get to enjoy this space at the community level and fun level until [the festival] is out,” she said. “We gave it a good hurrah.”