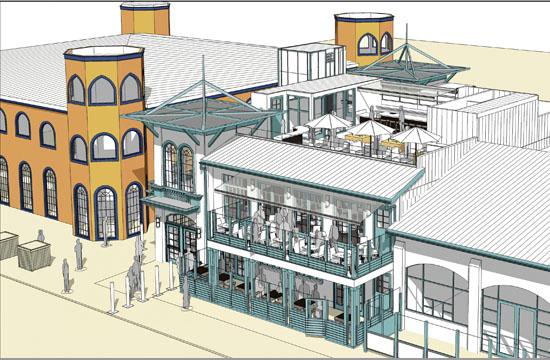 The new restaurant, Piazza al Mare, is a project of Franco Sorgi and Paolo Simeone, who also own Trastevere restaurant on the Third Street Promenade and La Piazza in The Grove. Piazza al Mare will be more upscale than Trastevere, Simeone told The Mirror.

The restaurant will have three levels of dining including a rooftop dining terrace. While the structure’s exterior will remain largely intact, the interior will be new. The 9,000 square foot restaurant will seat 260 people and offer plenty of outdoor dining space and ocean views.

An opening date of spring 2012 is targeted, said architect Michael Meers of David Forbes Hibbert Architects. The project recently received approval from the Santa Monica Landmarks Commission and is currently in the plan check phase, which involves review and approval of the building plan.

“Upgrading a building built in the 1920s and maintaining current codes on a 100-year-old structure (the pier) is unique,” Meers said. “It’s unusual doing a project that’s not on the ground.”

The previous tenant at this location was a nightclub called The Arcadia, which closed its doors about 10 years ago. Another nightclub, The Ash Grove, occupied the space before that. In view of the failures of the two nightclub tenants, it made sense to change the use of the space from a nightclub to a family restaurant with live music, said Elana Buegoff, senior development analyst and pier leasing manager for the City of Santa Monica Economic Development Division.

During the past 10 years there were a number of false starts for potential tenants in the space, Buegoff said.

The space was leased periodically for special events such as weddings and film shoots, but a long-term lease has been elusive until now.

In other news, the City is seeking restaurant proposals for the space at 256 Santa Monica Pier, in the same building as Piazza al Mare.

This space is currently occupied by Rusty’s Surf Ranch restaurant, whose lease is about to expire.

There are few leaseholds available on the pier, and the next opportunity won’t be for another decade, said Buegoff.

For more information about this space, contact Project Manager Donna Rickman at 310.434.8906 or donna.rickman@smgov.net.