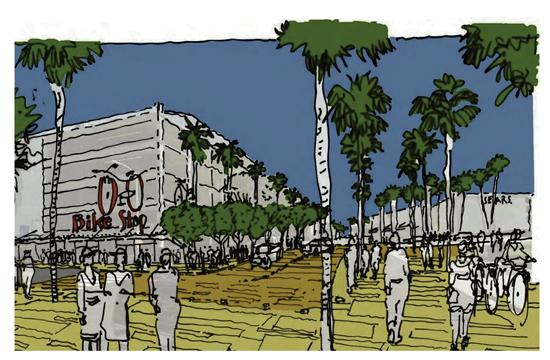 The Colorado Esplanade is slowly straying away from being an ambitious plan to beautify Santa Monica, becoming instead a genuine talking point as the Planning Commission continues discussion about the project’s future and how it fits within the context of the city’s redevelopment.

To be located at the convergence of the Santa Monica Pier, Third Street Promenade, Civic Center Plaza, and a pair of planned projects in the Exposition Light Rail Line terminus and the Palisades Garden Walk, the pedestrian-themed project is expected to draw thousands of daily visitors to the downtown area.

While the designer, Peter Walker and Partners, presented a variety of ambitious design concepts, executed in several iconic cities in a manner the company hopes to realize in Santa Monica, commissioners spent more time inquiring about ways to deal with the prospect of increased traffic in the area immediately surrounding the Esplanade.

Even though the city has developed the Land Use and Circulation Element (LUCE) to help deal with traffic flow issues, the addition, by 2015, of as many as 400 travelers arriving on foot at the Esplanade every few minutes, courtesy of the Expo Line, will not make life any easier for buses and auto drivers traversing the intersection of Colorado Avenue and Fourth Street.

The designers of Peter Walker and Partners did attempt to address the potential reconfiguration of traffic lanes near Colorado Avenue and Fourth Street. One plan called for three total street lanes and a widened sidewalk. Another plan with a “justified” design allows for more vehicles to travel westbound on Colorado Avenue along a widened northern half of the road.

As the plans tended to favor westbound traffic along Colorado Avenue, Commissioner Hank Koning pointed out eastbound traffic has to go somewhere, so why discount one lane in that direction? After all, many who would head west into Santa Monica will probably drive east out of town.

Another explored possibility was to direct traffic through the Esplanade one-way.

Though traffic circulation was a talking point, commissioners and the designer also discussed the actual design.

According to city officials, a portion of the project construction is funded by a Metro grant.

In terms of scheduling, construction is expected to begin by mid-2012 and completed in 2013, about two years prior to the arrival of the Expo Line.