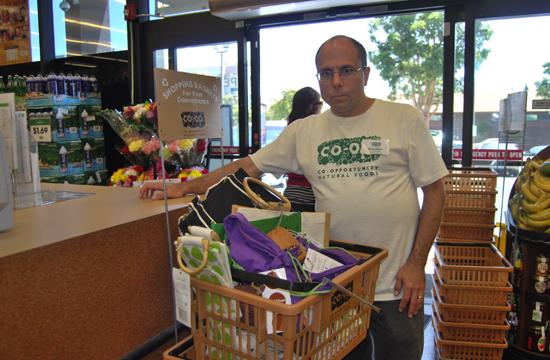 Now, retailers across Santa Monica are no longer permitted to provide their customers a single-use plastic carryout bag. As part of the ban, the ordinance also imposes a 10-cent fee for each recycled paper bag used.

Most retailers in the city have taken advantage of the grace period not only to urge consumers to diminish their reliance upon plastic bags, but also to curb paper bag use and instead rely solely on reusable bags.

The Santa Monica CO-OP has been one grocery story that has been proactive in helping shoppers seamlessly transition from plastic and paper bags to reusable bags.

In addition to completely discontinuing the distribution of single-use plastic bags, the CO-OP offers several varieties of reusable plastic bags.

Josephine Miller, of the Santa Monica Environmental Programs Division, said the city hoped the 10-cent fee on recycled paper bags would discourage shoppers from using them.

“Putting that price on it really does affect the consumer. It does encourage them to (shift to reusable bags,” she told The Mirror.

Even more, the fee is per bag per visit, which over time may add up. At stores such as the CO-OP, shoppers may instead opt to spend 99 cents on a polyester reusable bag or up to $3 or $4 for a canvas bag.

Palma said in the long run, the hope was to not having to worry about charging for recycled paper bags.

“We’re hoping that they just don’t take the bag,” he said.

In encouraging increased use of reusable bags, Miller and other city officials have been working with grocers and other stores affected by the ban to train employees there how best to deal with the ordinance’s implementation on Sept. 1.

One example of the training programs between city and retailers was the change in verbiage used when cashiers and baggers interact with customers. Specifically, instead of asking a customer to choose paper or plastic, the bagger or cashier would inquire whether the shopper brought his or her reusable bag.

Also, an employee would no longer ask whether a customer wanted to “double bag.”

“First thing to ask a customer is ‘Did you bring your bag today?’ not ‘Do you want a bag?” Miller said.

Palma added he had observed a noticeable change, accordingly, as many customers were not only bringing their own reusable bags, but they also averaged using between three and five bags per visit.

Of course, the CO-OP is not the only grocer in Santa Monica working alongside the city in transitioning away from plastic bags. Major supermarkets and local stores alike within Santa Monica’s borders are abiding by the ban as well, city officials have indicated.

According to the city’s Office of Sustainability and the Environment, Santa Monicans consumed as many as 26 million plastic bags annually. Nationally, it is reported the average consumer goes through about 500 plastic bags per year.

Plastic “product bags” that are distributed within a grocery store for bagging procedure are not prohibited by the ban. Other exemptions include restaurants (for purposes of transportation of take-out orders), department stores, clothing stores, and stores selling durable goods.

Single-use plastic bags were first introduced to consumers in 1982. It is estimated that 19 billion single-used plastic bags are used annually in California.