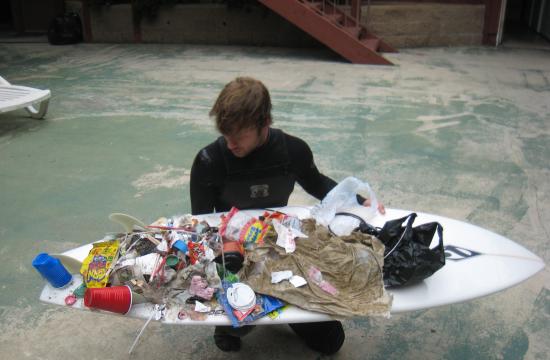 Santa Monica resident and SaMoHi teacher Benjamin Kay has been surfing off Bay Street for many years, but has somewhat of an unusual routine of stuffing trash down his wetsuit one to two times a week in a bid to do his part to help clean-up the ocean.

On Sunday, he collected a surfboard full of trash (pictured above) between waves from 10 a.m. to 12:30 p.m.

Kay explained to The Mirror how he managed to collect so much trash using his wetsuit.

“My wetsuit has a top flap that I put my head through, which buttons in the front,” Kay said. “I usually bunch up smaller plastic films into a ball and then put those in bigger bags I find, which I then lodge under the flap. This pins the plastic against my neck and chest. I also use the arm pocket, but this only holds baby pieces.”

Kay, a full-time Marine Biology and Biology teacher at SaMoHi, and part-time adjunct professor at SMC, said he started to collect trash while surfing back when he was a teenager.

He said he was influenced by his marine biology teacher at PaLiHi, Ray Millette, when he was in high school, who he still regularly surfs with.

In the water, Kay said he comes across the same single-use culprits: plastic films/wrappers, grocery store bags, and balloons that look like jellyfish.

Some of his rarer findings included a vile of blood, used syringes, and dead wildlife such as fish, sharks, seals, and birds.

“Water enthusiasts and beach goers know the problem well, but that doesn’t mean we always push for changes beyond an individual level,” Kay said.

“Proper waste disposal, recycling, and beach cleanups help, but each high tide will continue to cough up another plastic meal on the shore until we stop plastic pollution at the source.”

He said fishermen and surfers are keenly aware of the “soup” as they regularly snag plastic rubbish all the time.

“I wish I could say the slimy films we contact were mostly dislodged seaweeds – that’s not the case anymore,” he said. “In general, people all too often seem disconnected from the issue or become complacent as the baseline for “pristine” shifts with each generation. Meanwhile, we seem to have adopted a convenience-based, single-use, throw-away culture which exacerbates our plastic waste streams.”

He said he worried about people being complacent by nature, and even more so about the people upstream/inland because “they don’t see downstream as often and are unfortunately spaired the visual education that I receive on a weekly basis.”

“It doesn’t take a rocket surgeon to know we have a serious problem, one that necessitates immediate intervention from the top down and bottom up,” he said.

As a 32-year-old native and a local surfer, angler, kayaker, diver, marine researcher and educator, Kay said he can empirically say plastic pollution has steadily worsened over his lifetime.

While he harbors much hope for improvement, which stems from the recent Santa Monica plastic bag ban and litter abatement devices deployed in storm drain catch basins, he said single-use plastics have successfully pervaded the marketplace, with no overnight solutions in sight.

He has developed a Paddle Clean-up idea to involve the community.

“I’d like to engage the surfing, boogie board, paddle board, kayak, and diving communities in an aquatic cleanup to help us all get on the same page about the reasons for and sources of plastic pollution and build a greater activist coalition,” he said. “I heard a guy in the water yesterday blame beach-going litter bugs for the problem, but the reasons for plastics into our oceans is much more complex than that.”

Kay is also a local supporter and member of many non-profits.

“My Team Marine and Heal the Bay Surfrider Club students at SaMoHi and I are also closely partnered with Heal the Bay, Surfrider Foundation, 5Gyres, The Daily Ocean, Algalita Marine Research Foundation, Tree People, Jane Goodall’s Roots & Shoots, and the Plastic Pollution Coalition,” he said. “Our levels of involvement range from simple beach cleanups to lobbying all levels of government for bag and Styrofoam bans to conducting water quality research to showcasing gigantic eco-artwork to raise awareness.”

While he continues his eco-efforts, he will continue to collect trash with his marine biology teacher from high school, and now long-time fellow surf buddy, Ray Millette, who has been an inspirational eco-role model for him since their first surf together in 1996.