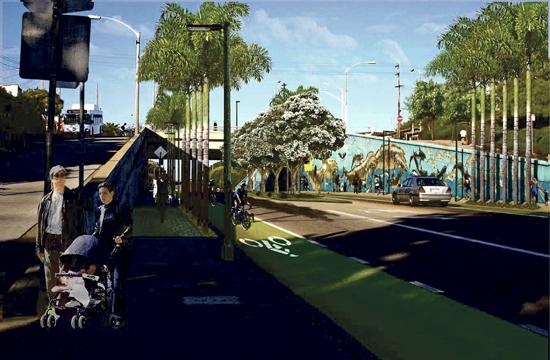 Summer of 2011 is at its tail end, which means the changing of the colors in certain corners of the world. Here in Santa Monica, the colors are not the only thing changing, as this fall means the transformation of Ocean Park Boulevard into a “Green Street.”

“This project is expected to improve the character and functionality of the street for all users, and improve the quality and reduce the quantity of storm water runoff from the adjacent drainage area,” said Rick Valte, a principal engineer with the city, in his staff report about the project.

Carrying a construction price tag of about $3.8 million, the “Green Street” will completely change the physical landscape of about two miles of road in the southwestern corner of the city.

The aim of the new Ocean Park Boulevard is to “reclaim… public open space” and rescale the thoroughfare according to the principles of the Land Use and Circulation Element (LUCE). Accordingly, once the “Green Street” element is complete, Ocean Park Boulevard will be much more conducive to bicycling and pedestrian activity, while also adding in landscaped medians, murals, and green parkways.

According to the Planning Department, the “Green Street” project has sought “to develop solutions to issues based on scale, character, health and safety, sustainability, landscaping, accessibility, and circulation.”

“Central to the Land Use and Circulation Element’s (LUCE) philosophy on the role of streets, a “Complete Green Street” is one that is pedestrian scaled, landscaped to provide shade and canopy, conserves water and reduces urban run-off, calms traffic, and provides for all modes of travel including pedestrian, bicycle, automobile, and public transit,” Valte stated.

Finally, more than 100 new trees are expected to be added along Ocean Park Boulevard. Some of the trees that have already been considered at the various community workshops include: Cassia leptophyllous (Gold Medallion Tree); Syagrus romanzoffianum (Queen Palm); Arbutus Marina (Marina Strawberry Tree); Rhus lancea (African Sumac); and, Brahea armata (Blue Hesper Palm), among others.

Funding for the “Green Street” project was made possible by a combination of resources, including Measure V (the Clean Beaches and Ocean Parcel Tax), Proposition 1B, Proposition C, and the city’s General Fund.

While the street scape budget will approximately be $3.8 million, the Planning Dept. indicated another $1 million may be allocated to the Los Amigos Park retrofit (pending feasibility).

Another $450,000 was allocated to the schematic design and construction document preparation, while the concept plans presented to council members early on carried a price tag of $120,000.