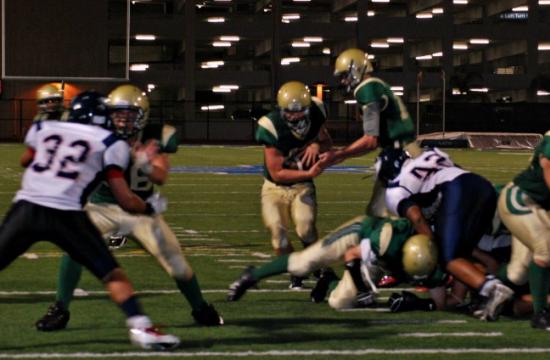 Sean Martinez and Kevin Holubowski combined for four rushing touchdowns while Luke Cain tossed for another score in his start at quarterback and the St. Monica Mariners (2-2) ended the game with 27 unanswered points to take down the Brentwood Eagles (1-2), 34-14 on Saturday night at Corsair Field.

“We made some adjustments on formations (at halftime),” Mariners’ head coach Adam Guerra said. “Our players started playing to their potential. Quarterback Luke Cain in his first start threw the ball, which opens things up; Sean Martinez put the game away (and junior) Kevin Holubowski … the sky’s the limit with that kid.”

Things did not look so promising early on.

After Eagles quarterback Connor Boggs found Jacob Woocher in the end zone for a 25-yard passing strike to give Brentwood a 7-0 lead late in the first quarter, St. Monica would punt the ball three more times before finally engineering an 80-yard drive to tie the game at 7-7 with 23 seconds remaining in the half. It was Cain finding Lukas Dretzka in the end zone on an 18-yard pass for the Mariners’ first touchdown.

However, Etienne Tremblay returned the ensuing kickoff 90 yards for a touchdown, allowing the Eagles to reclaim the lead just before halftime.

But the second half saw St. Monica open with a 60-yard scoring drive behind Martinez’s 41 rushing yards and Holubowski’s pummeling three-yard rush into the end zone to tie the game, 14-14.

On the ensuing Brentwood possession, St. Monica’s Dretzka recovered a Boggs fumble on Eagles 14. Four plays later, Holubowski barreled through the Eagles’ defensive line again for a two-yard score to give the Mariners a 21-14 lead.

After Martinez scored on a 20-yard run in the fourth quarter, St. Monica got the ball back milked the clock. Six and a half minutes turned to a little over one minute after some great ball control and one more 17-yard touchdown from Martinez to secure the 34-14 victory..