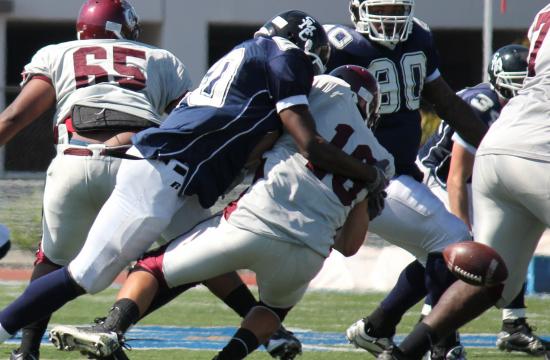 The impenetrable Corsair defense held the Compton College Tartars to a net total of two yards and the offense used a strong running game to get the season-opening 24-0 win.

“That was a good launch point,” said SMC head coach Gifford Lindheim. “We can’t lose if they can’t score.”

The Corsair ground game combined for 220 yards, led by 63 yards from Alonzo Frederick and 44 yards and two touchdowns by Daniel Pipkin. Aaron Jones added 43 yards and Miles Johnson had another 30. The four combined helped seal the victory.

“We were able to hang our hat on the run game,” said Lindheim about the 392 yards of total offense. “It was a business type win (and) we got the shut out.”

Travis Williams and Alfonso Medina shared time at quarterback for the Corsairs behind solid pass protection that only gave up one sack.

After a slow start from Williams, freshman Alfonso Medina came in with about six and half minutes to play in the first quarter and led an eight-play, 60-yard drive for the opening score capped by Pipkin scoring one of his two touchdowns on the ground to open the game at 7-0.

Medina then threw the games only touchdown pass to Johnson in the second quarter after a lengthy 16-play, 80-yard drive to make the score 14-0. Medina finished 11-of-18 for 111 yards and Williams finished 6-of-16 for 61 yards and an interception.

Among all the great play were the devastation of penalties. SMC had 16 penalties for 208 yards and the teams combined for 26 penalties for 420 yards. Lindheim knows this is what happens in the opening game of the year.

“I think we really just have to look at the film and get better at what we’re doing,” Lindheim said. “We know who we are, offensively and defensively… For me, I’m never worrying about our opponent. I’m always worrying about us, and that’s every week of the season.”