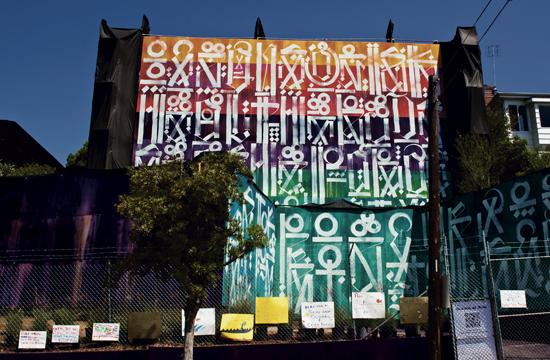 When fourth-generation Santa Monica resident Adam Corlin unveiled his “Oceans at Risk” art project last Thursday at 825 Berkeley Street, he thought the 150 wood panels hung on scaffolding would raise awareness about the ocean and animals that live in it.

Instead, the tides turned on the 45-year-old when media attention quickly shifted away from his environmental message to Corlin’s art becoming the subject of litigation with the City of Santa Monica.

Just hours after the unveiling, a Compliance Notice was issued, saying the structure was a hazard, and fines of up to $5000 a day would be issued if the scaffolding with art wasn’t immediately taken down.

“The sad part is that everybody is focusing on the issue I have with the City,” Corlin said. “I’m fourth generation to live in this city, I love this city, I do business in this city, I’ve worked with this building department before on several projects, and I will hopefully continue to work with the city again.”

His idea for the art project came about three months ago when he and his partner bought the dilapidated property in northeast Santa Monica.

The house had been vacant for almost four years; it was full of trash and debris, and even occupied by a squatter.

He cleaned up the property and applied for City permits so he could renovate the property. He realized he had several months up his sleeve with not much going on at the property, so he came up with the “Oceans at Risk” art project, which he decided he would unveil the week before California Coastal Cleanup Day, to be held this Saturday, Sept. 17.

Corlin, a longtime Heal the Bay volunteer, along with L.A. street artists Risk and Retna, dozens of committed craftsmen and laborers, worked long, hot hours hidden beneath plastic sheeting and tarps on the project.

But what stings most for Corlin about the entire saga is the fact he’s a builder with a state license since 1995 and “safety is always number one,” he said.

“I was surprised,” he said. “I never knew I was going to need a permit for art. It never occurred to me, especially on a private property.”

He gracefully took the notice from the City inspector, read it, and luckily a lawyer approached him to work on a pro-bono basis to resolve the issue for him as she believes in his ultimate cause – protecting the ocean.

“I really want to focus my energies on the awareness and my causes that I’m supporting, Heal the Bay, The Sea Shepherds, and protecting the world’s oceans, and I’ll let my lawyer deal with the City of Santa Monica,” Corlin said.

Ron Takiguchi, a City of Santa Monica building official, said the Compliance Notice issued to Corlin last Thursday said to “immediately remove the scaffolding and panels from the property as they are a direct hazard to health and safety.”

“Non-compliance with the order for immediate removal is non-compliance with health and safety protection,” Takiguchi said. “The City does have mechanisms for those who violate City-issued orders which may include fines.”

Takiguchi said referral to the City Attorney was one method to proceed with fines and/or prosecution should compliance not be followed.

Corlin said he would begin to dismantle the art structure tomorrow on Coastal Cleanup Day as he had initially planned, but not before he fulfills his volunteering duties for Heal the Bay in the morning.