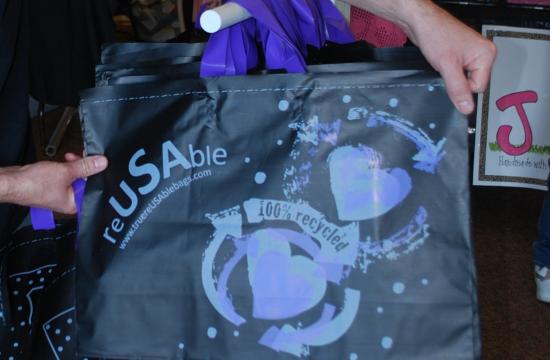 While the City of Santa Monica officially began enforcement of a citywide ban on single-use plastic bags on Sept. 1, one company is concerned about whether local shoppers will fully transition away from “paper or plastic” and seamlessly begin using reusable bags.

As retailers across Santa Monica must impose a 10-cent fee for each recycled paper bag used and are no longer permitted to provide their customers with a single-use plastic carryout bag, True Reusable Bags expressed its intent to help local shoppers fully kick the “paper or plastic” habit and instead embrace reusable bags each time they visit the local supermarket, grocery store, liquor mart, or pharmacy.

Indeed, most retailers in the city have done their part to urge consumers to diminish their reliance upon paper and plastic bags and instead rely solely on reusable bags. Even though plastic bags are no longer allowed in Santa Monica, True Reusable Bags pondered whether the 10-cent surcharge on paper bags was reason enough to quit using them.

“While the city has now created a radical change from ‘paper or plastic?’ to ‘pay-for-it paper or reusable bags?’ it’s not inevitable that consumers will follow their lead and actually adopt reusable bags,” True Reusable Bag’s CEO Pete Grande said. “So long as a single-use bag supplied by stores is an option, the added cost as a convenience to the consumer is still an acceptable tariff for most shoppers.”

For True Reusable Bags, in order to truly eliminate the impacts of paper bags and realize the benefits of reusable bags, a “major shift” in mentality must take place.

“Unless the ordinance ‘promote(s) a major shift toward the use of reusable bags’ as the city council expects, the ordinance won’t lower the city’s waste and litter costs and deliver the desired environmental benefits,” Grande said.

Grande added while the single-use plastic bag ban ordinance is well intended; it is just the first step in affecting the desired change in consumer habits.

“The question isn’t just whether consumers will migrate to reusable bags, but whether they will change their habits and use them as intended,” he said. “Banning bags doesn’t reduce the need for a convenient way to carry our purchase home or have something to put our trash or lunch in when we are home. Bags that are designed to be reusable do not necessarily inspire consumers to reuse them enough times to justify their increased environmental impacts.”

Accordingly, True Reusable Bags hopes to complement the Santa Monica ordinance by creating and offering a reusable bag that would actually be reused.

The company points out that its bags are not only the most environmentally-friendly on the market, but are also much more convenient than those currently offered by Santa Monica’s stores and markets.

Grande said it is the convenience of the bags made and offered by True Reusable Bags that may indeed propagate a shift in consumer behavior when it comes to steering away from paper or plastic bag use.

“You can’t use a reusable if you don’t have it with you,” he said. “Most bags are bulky and, while they may look sturdy, that bulkiness is also inconvenient. In response, the True Reusable Bag was designed to fold up so that it fits in your pocket and allows you to place a few of them in a purse or car door. Creating a reusable bag that is easy to carry around may prove to be more important in changing behavior than an avalanche of ordinances, fees, and fines.”

In addition, Grande described the True Reusable Bag products as the most environmentally friendly on the market.

To find out more about True Reusable Bags, including styles available and pricing of bags, visit http://www.TruereUSAbleBags.com/, or call 800.996.BAGS (2247).

The single-use plastic bag ban was unanimously approved by the Santa Monica City Council on Jan. 25. Santa Monica’s ban on single-use carryout plastic bags, which was under development for three years, was officially in effect 30 days after the council’s action, but as a grace period lasting about six months. That grace period ended on Sept. 1.