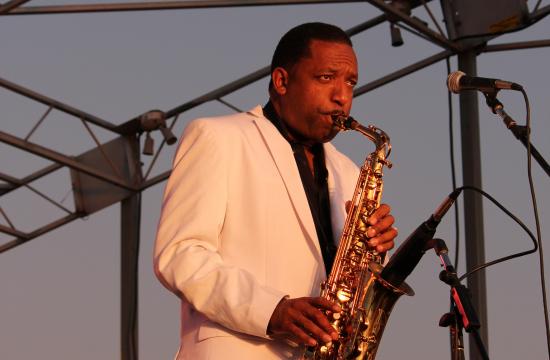 The Donald Harrison Electric band opened the southern evening themed “A Night in Treme,” performing an extra long set bringing the soul of Cajun music to delighted be-bopping attendees who danced on the pier.

“I dedicated my life to keeping the culture of New Orleans alive,” said front man Donald Harrison. “I take every moment and cherish it.”

The crowd was especially excited when the Donald Harrison Electric band played the song, “When the Saints Go Marching In.”

Harrison played a variety of instruments including the congas and saxophone.

“My father bought me a sax when I was 10,” Harrison said.

Harrison finally started to learn to play the sax after his father would constantly ask, “why aren’t you playing your saxophone?”

Harrison said he played the saxophone sporadically, but only became serious about the instrument in ninth grade.

Harrison said he enjoyed giving the young musicians in his band, who are all from New Orleans, the opportunity to perform on stage with him.

“I’ve been playing with these guys since they were sixteen,” Harrison said. “That was five or six years ago.”

Harrison has also performed with a variety of top-notch artists including the Notorious B.I.G.

“I was involved with the Notorious B.I.G. when I was young and hip hop got into my soul,” Harrison said.

During a song in Harrison’s set, he began to rap and infused the elements of hip-hop inside of his New Orleans style of music.

Harrison said all these experiences helped shape the music he plays today.

Harrison, who lives in New Orleans, survived Hurricane Katrina in 2005 and went on to explain his harrowing experience during the calamity.

“I was in Katrina,” Harrison said. “I decided to stay and it was total craziness. After losing everything (including his house), I was just happy to be alive.”

Mainstay guitarist Detroit Brooks was also affected by Hurricane Katrina and lost not only his house, but also all of his guitars.

“I went to Baton Rouge for three weeks,” said Brooks about his decision to leave New Orleans before Hurricane Katrina hit. “I’ve been through it, and (I’m) still going through it but I’m still here.”

Brooks went on to tell a gripping story about his time in Baton Rouge where he eventually settled in for a few years while his house was being rebuilt. He has just started to move back and get his home back in order this past year.

Brooks played a Heritage Sweet 16 guitar during his performance on the Twilight Dance Series stage.

“Henry Johnson gave me this guitar,” Brooks said. “I told him I survived but that I lost all of my instruments. Within three days he (Johnson) had sent me a UPS package to Baton Rouge. I heard the doorbell ring, went out and looked on the porch, and there it (the guitar) was.”

John Cleary played the entire set on his Roland keyboard showing prowess and talent on the instrument.

At one point, Cleary invited Harrison onstage and the pair performed together.

Harrison took to the saxophone while Cleary stayed playing smooth jazz on his keyboard.

It was clear the pair were having fun playing together as both artists frequently smiled.

“It was a great experience,” said Harrison. “The energy was up there.”

The 27th annual Twilight Dance Series officially ended after Cleary left the stage, wrapping up a successful 10-week event, which the entire staff of the Pier Restoration Company can look back at and hold their heads high.