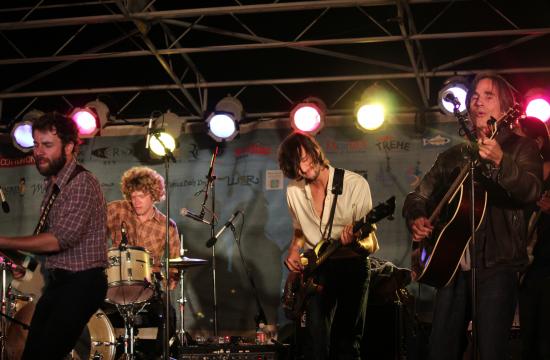 The ninth night of performances of the Twilight Dance Series on Thursday at the Santa Monica Pier featured a trio of “Americana Bands,” that gave homegrown bands the opportunity to display their prowess and talent in a beach style setting for the more than 5000 in attendance.

The bands were Olio, Sonny and the Sunsets, and Dawes.

Dawes not only played an incredible set, but also featured a “surprise guest,” Jackson Browne, who joined them onstage for several songs.

The High Definition LED screen sponsored by Screenworks returned the evening to give the crowd on a beach a close-up of the action.

Olio, winner of Rusty’s Surf Ranch Battle of the bands, started the night off right with a full 45 minute set pumping up the crowd with their airtight rock and roll.

“Things have been buzzin’,” said DeHaven Carrington, drummer for band Olio. “This is a direct result of our win (during week four of the Twilight Dance Series) this summer.”

Carrington and his triage of musicians have been booked at venues all across the Southland after winning the highly competitive competition at Rusty’s Surf Ranch. They were pitted against other high powered local bands such as The Bad Bad Things, Down Home, PapaFish, and One High Five.

“We’re super excited,” Carrington said about Olio’s chance to play at the pier again. “Obviously we are bringing a lot more to the table then just a 15 minute set.”

After the sun went down, Sony and the Sunsets took the stage.

Sonny Smith, lead singer and guitarist of Sony and the Sunsets, was part of the only band that wasn’t from the area, but they might as well have been.

Smith’s band resides in the Mission District of San Francisco and their popularity has sent them traveling all over North America and parts of Europe.

At the Twilight Dance Series event, they played their hit songs, “Too Young to Burn,” “Death Cream,” and “Planet of Women,” off their 2009 album “Tomorrow is Alright.”

Smith arrived early to the event and decided to take a dip in the ocean before his set.

“I already went swimming,” said Smith about his first encounter with the large ocean breakers smashing on the sand during his day on the Santa Monica Beach. “I (also) played the rope game (at Palisades Park). It’s impossible to win.”

Smith is lucky he survived his “swim” in the abnormally large surf that day, as many locals decided it best to remain onshore. Santa Monica lifeguards flew a yellow flag with a black ball warning people of rough surf conditions.

The pier was packed by the time local band Dawes went onstage.

Dawes may be the hottest upcoming band in America right now. In June, they played on the “Late Night with David Letterman” show after making their late night debut the year before on “The Late Late Show with Craig Ferguson”. They have been on the road stoking audiences since.

Earlier this year their song, “When My Time Comes” was featured in a Chevy Silverado commercial, which had boatloads of fans on the Santa Monica Pier singing the song.

Then came a surprise.

Late in Dawes’ set, Jackson Browne appeared onstage amidst heavy applause of the audience in attendance.

“That dude is awesome,” said Griffin Goldsmith of his opportunity to play with Jackson Browne on the Santa Monica Pier.

An encore set by Dawes with Jackson Browne was demanded by the audience and approved by organizers of the event allowing for more “Americana” music to ensue.