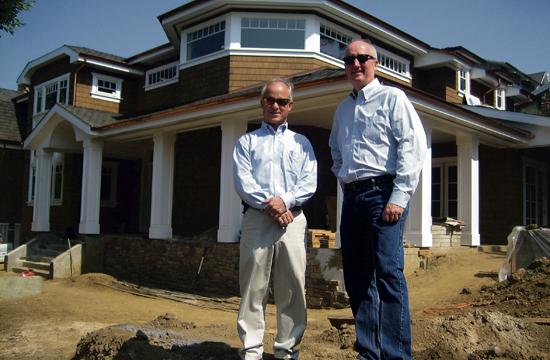 For more than two years, Santa Monica resident and home developer John Youngman has been battling the city for approval of his water recycling system at 303 22nd Street.

Last Friday afternoon, the nightmare finally came to an end, but Youngman says the delay caused by the City’s permit approval system and internal city staff rivalry has cost him at least $50,000 and put the project several months behind schedule.

The saga started in 2009, when Steve Bilson of ReWater Systems filed the original permit on behalf of Youngman. Bilson was hired as the contractor because he had successfully obtained a permit for an identical ReWater system at 222 Palisades Avenue without any hassles just weeks prior.

Since City staff had previously issued an identical permit to Bilson in just two months, Youngman hoped he would have the same success, but it could not be any further from the case.

“The only part of the state code that had changed since then that was relevant to this system versus the previous system was that the grey water emitters can now be two inches deep versus the previous nine inches,” Bilson said. “Because the code was essentially the same, and the system was identical, permitting this system was easier for the city’s plumbing plan checker, Shane Peters, but it was not easier for their public works plan checker, Kit Dallarte.”

The original permit lodged in early 2009 was a paper application, which was the city’s former way of doing business. However, amongst all the delays, the City’s ePlan system came into action on Nov. 1 last year, where all permit submissions had to be submitted electronically.

“Kit (Dallarte) approved the complete ReWater system from Public Work’s perspective back then almost two years ago.” Bilson said. “What screwed everything up was an internal rivalry between Kit and the more citizen-friendly Shane (Peters) in Building and Safety. Kit would not accept Shane approving anything that Kit unilaterally decided was under Public Work’s jurisdiction, despite the meeting of virtually everyone in the city involved with this permit whereby everything for the permit had been ironed out.”

Bilson said Shane Peters eventually asked him to split up the ReWater system application into two parts and draw the system as two separate systems. One drawing would fall exclusively under the plumbing code, and would consist of what is traditionally considered plumbing stuff (pipes inside the house), and the other drawing would include everything else that Kit Dallarte considered under his purview, which was everything outside the house including the irrigation system, Bilson said.

Bilson said this was bizarre for a couple of reasons.

“First, the entire grey water irrigation system code including everything outside the house is found in the state plumbing code; there is really no good reason for Public Works to be involved in this type of permitting to begin with,” he said. “Second, splitting the system into two drawings was a facade, as the ‘plumbing’ aspects of the system are inseparable from the ‘other’ aspects of the system. I don’t know how you show a functional system if a pipe connecting the grey water filter to the underground drip irrigation system can’t connect on the drawing?”

With the ReWater system artificially “split up,” neither system depicted could actually work in the real world, but those two drawings were what it took to satisfy Kit Dallarte, according to Bilson.

“The one and only problem with that facade was that Kit then found the drawings to be incomplete,” Bilson said. “Whether later he spaced out and forgot that he’d demanded those two drawings, or later determined that he didn’t want to admit he’d demanded those two drawings, he eventually wrote notes to the effect that the drawings stunk and put those notes on the city’s ePlan program.”

The next problem was that neither Bilson nor Youngman were ever told Kit Dallarte’s notes had been entered on the ePlan program.

“We weren’t looking for them there when we were trying to locate them to determine the problem, and didn’t know to ask people to look there until recently,” Bilson said. “Another problem was that ePlan does not notify one city staffer when another city staffer makes notes that halt a permit process, and Shane did not realize what Kit had said or done in his new notes, because Kit wasn’t talking with him anymore. Perhaps the biggest problem was that Kit would not return anyone else’s phone calls either, until very recently.”

Youngman said he was frustrated with delays, saying it had slowed him down “two to three months” and when converted to a cash value, “at a raw cost, we’re probably talking $50,000.”

“(City staff) don’t seem well versed with their own system, they don’t understand it that well, I don’t know if they’ve been properly trained, but it seems to be very confusing for them,” Youngman said. “The real issue that I see, is that there is very little incentive on their part to learn it, to help you out, to speed things up, it’s kind of like ‘it doesn’t work that well, it’s just going to take longer’.”

He said what made matters worse was the fact there was no recourse for city employees if they held up projects.

“These people are very independent, very powerful,” he said. “I have no idea how they get hired and fired, I don’t think they ever get fired, but it’s just so frustrating because months go by. It’s zero downside on their part for inaction, and it costs me a fortune when they don’t follow through and do what they say they are going to do.”

Last Thursday, Bilson said he met with Mark Cunoe, Kit Dallarte’s new boss, and explained to him the entire situation. On Friday at about 4:30 p.m., Cuneo called to say the permit had finally been issued.

Ron Takiguchi, a City of Santa Monica building official, said two years far exceeded the expectations that the City wanted to permit something.

“Since grey water was somewhat new, the requirements were not fully known by the applicant, on both sides,” Takiguchi said. “I’m not pointing fingers here. This is a system that was custom, and an item that had to be detailed very much. It wasn’t a simple grey water system.”

He said the ePlan system still had improvements to be implemented to speed up the permit approval process.

He said he was currently in discussion with the software vendor to explore the option of a parallel review, meaning that each separate entity within the city such as the Fire Department, Building Safety, Public Works, Transportation, Planning, could process applications quicker than the current “serial review” system.

The “serial review” system does not allow one department to upload its new notes/plans until all other departments are all at the same stage.

“A plan has to go to several different city departments, so the applicant would have to wait until all departments are finished before they could upload the next version,” Takiguchi said.

The ePlan system currently does not cater to Macintosh/Apple users, as it only accepts Internet Explorer, another problem Takiguchi is working with the vendor to fix.

While this particular nightmare may be over, Bilson is concerned that Dallarte is still working for the city as he may have “an axe to grind,” and Bilson worries this particular type of nightmare can happen again to anyone who tries to obtain a permit.