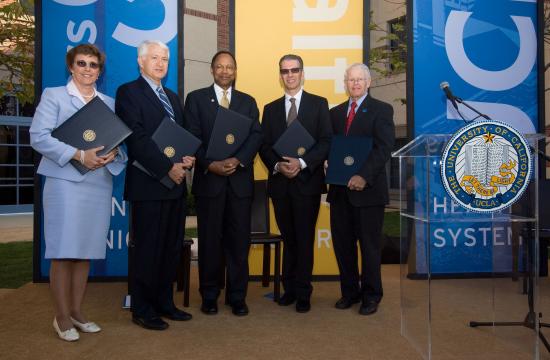 A lot has happened in 16 years, but the UCLA Health System finally dedicated the rebuilding of one of its prized hospitals in Santa Monica on Friday, Sept. 9. The dedication was a long time coming for the Santa Monica Campus of the UCLA Medical Center.

Damaged in the 1994 Northridge Earthquake, the hospital has been part of a massive rebuilding project within the UCLA Health System.

Hundreds of doctors, nurses, administrators, and city leaders filled the garden courtyard just in front of the UCLA Medical Center – Santa Monica to witness the facility’s dedication on Friday.

When the university-based hospital purchased the medical facility in 1995, Southern California was still recovering from the 1994 Northridge earthquake.

The Internet had not quite arrived yet, Paul Rosenstein was mayor while Pam O’Connor was serving her first term on the city council, and UCLA’s mens basketball team claimed the NCAA national championship.

Now, with a fully-functioning hospital officially in place on the corner of Wilshire Boulevard and 16th Street, Santa Monicans and Westsiders have a world-class facility essentially in the center of the city to receive a myriad of medical services.

“We now finally have a facility that is on par with the great quality and safe service-oriented that we provide,” Posie Carpenter, chief administrative officer of the UCLA Medical Center – Santa Monica, told The Mirror. “This … is a destination hospital for health services. People are choosing to come to a hospital that’s an important part of the UCLA Health System.”

“It’s a special hospital because we have the ability to deliver kind, caring, very friendly care in a hospital that is right-sized for the community,” UCLA Medical Center – Santa Monica’s Medical Director Dr. James Attkinson told The Mirror of the 266-bed facility. “But we (also) have access to the best physicians in the world, we have access to the resources that we need to take care of a patient no matter what is their ailment.”

Also attached to the UCLA Medical Center – Santa Monica is the Orthopaedic Hospital Institute opening in 2012, which will include an outpatient clinic, administrative and faculty offices for the UCLA Dept. of Orthopaedics, and a library.

Dr. David Feinberg, who serves as president of the UCLA Health System and CEO of the UCLA Hospital System, said the medical facility aims to provide efficient and personal care to each and every patient served.

He also added the building’s facade was built with “UCLA Brick.”

“There is only one guy who makes ‘UCLA Brick’ … and the significance of the ‘UCLA Brick’ is so important because when you walk inside, it’s UCLA care,” Feinberg told The Mirror.

Calling the hospital a “world class facility for a world class city,” City Manager Rod Gould, said UCLA Health Center’s Santa Monica campus is a bit of a sampling of the type of planned development that will be coming to town during the next few years.

“I think it’s indicative of the quality of development that you will see in Santa Monica as it renews itself, as it moves into the future,” Gould said, adding the facility not only can withstand most emergencies, but is environmentally friendly and built for form.

“We’ve been a leader (in medicine) for years. We have great health care close at hand, but it’s something we also provide to the region. All of our surrounding communities benefit by this, as well,” he told The Mirror.

Originally the Santa Monica Hospital Medical Center, the facility opened its doors in 1926. Almost 70 years later, the hospital was significantly damaged during the 1994 Northridge earthquake.

A little more than one year later, the University of California system acquired the hospital and renamed it “Santa Monica-UCLA Medical Center.” Ever since, the UCLA Health System’s Santa Monica campus has been part of a network-wide rebuilding project to bring various facilities up to various codes.