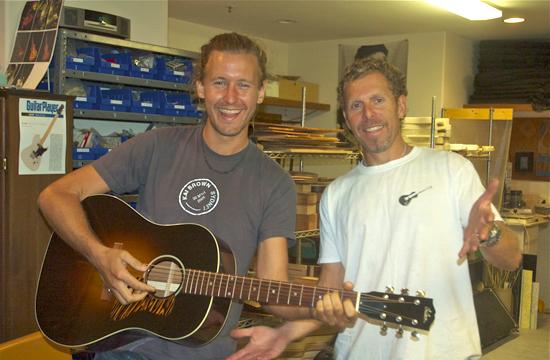 What is lost can eventually be found again. Sometimes, the reincarnate has more meaning or significance than the original. Such was the case for local musician Clayton Joseph Scott, a Venice singer-songwriter who had his Gibson J-45 guitar stolen from him during a June photo shoot in the Venice Canals a few miles south of Santa Monica.

Hoping the culprit would eventually surface in the local music community by attempting to sell or trade the guitar, Scott sent a mass email to music and guitar repair shops throughout the Venice, Santa Monica, and Westside region.

Initially hitting a wall, Scott expanded the search for his guitar to Craig’s List, where he posted an advertorial explaining his situation.

Just before doing so, Scott had received an email response to his original note from Bill Asher, the owner of Asher Guitars (located on Lincoln Boulevard near Washington Boulevard) and a “master guitar builder.”

“I hadn’t come across his stolen guitar, but know how that is. To lose a guitar, your only guitar, when you are a working musician can be devastating,” Asher said in his email to Scott, further suggesting the local musician pursue multiple avenues to locate his guitar, such as filing a police report, checking on E-bay, and scouring local pawnshops.

In his attempts to relocate his Gibson J-45, Scott went through with his pleas on Craig’s List. A respondent actually bit, sending an email to Scott that he (the respondent) actually purchased the guitar up from a Northern California shop.

However, the situation became dicey when the respondent requested money to cover the costs of buying the guitar before returning it to Scott.

Scott went through with sending the money, but was apparently swindled as he never received the guitar.

Despite the complications, Scott persevered, continuing to perform music with instruments graciously lent to him by good Samaritans. Scott had hoped to temporarily rely on the generosity of others in order to save up enough money to buy a replacement guitar.

While pursuing local gigs and maintaining his aspiring music career despite the absence of his own instrument, Scott had the fortune to reconnect with Asher. As the two discussed shop, Scott informed Asher of his recent lot, what with the whole Craig’s List experience and since having to rely on borrowed instruments in order to continue performing.

Touched by his story, Asher reached out to a client of his, Jackson Browne, to see if he could be of any assistance to Scott.

Last week, to Asher’s – and eventually, Scott’s – surprise, Browne donated a recently built Gibson J-45 from his person collection to the downtrodden musician.

“I was in disbelief,” Scott reportedly said after receiving the guitar. “It’s powerful to receive a material item like that from anyone, but for a singer-songwriter to receive a guitar from such a well respected musician as Jackson Browne, is amazing.”

Scott’s fortune did not stop there. Just before being the recipient of a noble gesture, Scott had made segue in independently funding his own album. With the new Gibson J-45, Scott will be able to complete the album on time and push for its release later this year.

Just the same, Scott also has a song, the maxi-single track “Heavy Rest,” currently receiving airtime up in Northern California and throughout Oregon; the track was released under the Indie label Sweet Mercy Records, to which Scott belongs.

Indeed, the travails of Scott’s misfortunes turned positive is a case of “Sweet Mercy.”

To keep track of Scott’s single and upcoming album, be sure to visit his Website at www.claytonjosephscott.com.