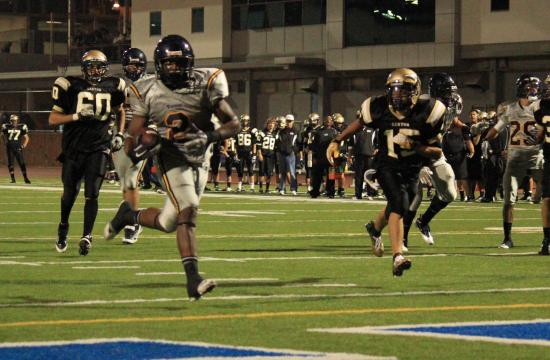 SaMoHi ran all over Canyon with an offensive attack that proved to be too much for the Comanches as the Vikings prevailed 42-0 on Friday night.

Running backs Kori Garcia and London Lewis combined their talents, rushing for three touchdowns behind an offensive line that also gave Christian Salem time to pass for another two.

“I got to give respect to my O-line,” said Lewis who scored two rushing touchdowns on the night. “They gave me the room so I give all the credit to them. I just followed their blocks and that’s what happened.”

The Comanches quickly punted on their first possession and Garcia, the Viking workhorse, quickly hammered away on the Canyon defense. After a fourth down conversion on a 30-yard pass from Salem to wide receiver Sebastian Larue, Garcia easily scored on a four-yard charge into the end zone.

Canyon went nowhere on their next possession and punted again.

The Vikings quickly took charge on this possession, and Salem scrambled for the first, converting yet another fourth down. Garcia added another powerful run of 31 yards before Salem connected on a six-yard pass to wide receiver Michael Jordan adding another Viking touchdown to put SaMoHi up 14-0.

Lewis took over the load for the Vikings after that. On SaMoHi’s next possession, he scored from two yards out in the second quarter and followed it up with a 13-yard score in the third.

Canyon failed to convert multiple fourth downs and the Viking defense, proved to be too much all game.

In the third, SaMoHi’s second string came in and still moved the ball on the Comanches. Wide receiver Anthony Hernandez scored the game’s final points from 11 yards out on a one-handed grab lobbed into the end zone by freshman Nico Basile to put the game away 42-0 with 1:31 left in the third quarter.

“We haven’t been 3-0 in a long time so I’m excited for them,” Vikings head coach Travis Clark said. “I think the offensive line set the tone for us tonight.”