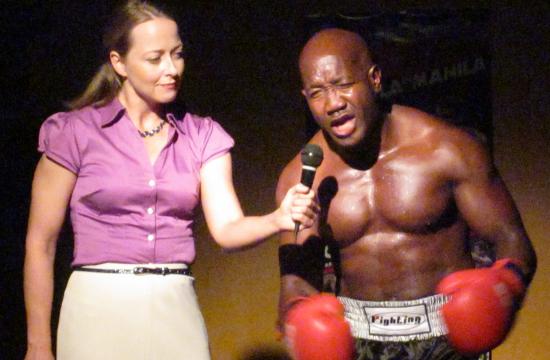 Besides being a popular sport, boxing is often used as a metaphor for life. A fighter “comes out swinging” or is “down for the count,” and these expressions have entered our language.

Jose Turner’s play “A Fight for Love” revolves around a youngish, but no longer up-and-coming, boxer named Michael Taylor. The “fight” that looms for him is a match with a pugnacious, bragging boxer, Likanjo Omakada, a.k.a. “The Nightmare.” Michael had quit boxing to study business management, a promise he made to his dying mother. If Michael can beat Omakada, he will be re-established in the arena. He might also be able to marry his girl Ruby. Most of all, he thinks he might be able to prove his worth to his often-absent career-politician father.

But fighting spills over into the inevitable metaphors when Michael encounters obstacles. He puts himself into the hands of his former trainer, Mr. Lawrence, who promises to work him incredibly hard (“You’ve got to be up at 4 a.m. every day to train”). Ruby is on his case to receive more attention from him, while an old platonic female friend, Beverly, plies him with baked goodies and advice. Cousin Demetrious, a snappy dresser and party-down kind of guy, shows up to give support but also to distract Michael with temptations. Tensions mount between Michael and his father as the latter mounts a campaign for Mayor of Detroit. And possibly related to his father’s campaign as well as his upcoming match, Michael is arrested and charged with rape, leading his friends to wonder if it’s a mistake or a smear tactic—or if the charge is true.

Michael reacts to all of this with a kind of denial. Too much is being piled upon his head. It would seem to be enough to make a person break down. The truth is however, that Michael is more of a “fighter” in his soul than he realizes. It will take the help of the people who love him to show him that strength.

The big issue for Michael is his relationship with his father, whom he felt was never around enough for him or for Michael’s mother. “When she was dying,” he notes, “he was 3000 miles away.” The estrangement of father and son and their need to come together is such a familiar theme in literature and theatre that, despite the strong emotions that are thrown like punches all through “A Fight for Love,” the familiarity of the material somewhat lessens the impact of the punch.

Jose Turner, who plays Michael and also wrote the play, shows a flair for authentic dialogue. The scenes between Michael and Ruby (Vanoy Burnough), Michael and Beverly (Melissa Gibson), and Michael and Mr. Lawrence (Hawthorne James) range from poignant to powerful. The lapses into cliché are the weak spots-for example, a major reveal toward the play’s end is punctuated with the trite “Hell has no fury like a woman scorned.” But there are also some great comic moments, especially in the scenes with the cocky Demetrious (Antonio Ramirez), and in the TV interviews with Okamada the Nightmare (Theodore Mark Martinez), who makes speeches to the camera reminiscent of Muhammed Ali in his heyday.

Veteran actors Hawthorne James, as Mr. Lawrence, and Duane Shepard as Michael’s dad Steven, are superb. James completely lives in the skin of his world-weary, philosophical trainer character. Shepard manages to make his portrayal of Steven sympathetic even as we realize the man has often behaved like a heel toward his family.

Overall, the acting is what allows “A Fight for Love” to go its 14-round (that is 14 scenes) distance. Turner may not be a world champion of the theatre yet but with this production, briskly directed by Shepard, he might be a contender. And you don’t have to like boxing to enjoy “A Fight for Love.”