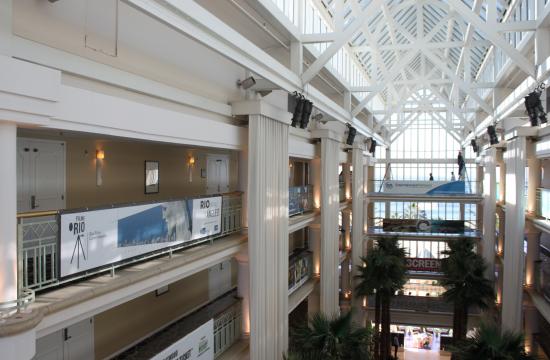 Loews Santa Monica Hotel checked-out its final overnight guests at noon on Friday in preparation for the American Film Market (AFM), which swings into full gear next Wednesday, Nov. 2 through Nov. 9.

The AFM is the world’s largest film market that features more than 8,000 industry professionals who converge in Santa Monica for eight days of deal-making, screenings, seminars, premieres, networking, and parties.

During AFM is also its Conference Series, a five-day conference program covering topics spanning from treatment to screen and featuring the industry’s global thought leaders, decision makers and experts, and 14 intimate, interactive and informative Industry Conversations led by visionaries, trendsetters, and experts.

The Mirror was on hand Friday to watch as the last of more than 500 mattresses and box springs from the hotel’s 342 rooms were loaded into trucks to be stored at a warehouse in Gardena to make space for the temporary offices at the hotel.

Office rental furniture and equipment as well as audio visual equipment will arrive today and tomorrow at the hotel located at 1700 Ocean Avenue.

Paul Leclerc, Loews Santa Monica Hotel Managing Director, said the hotel began to slowly shut down its normal operations with its lower levels closing down first so mattresses and box springs could be removed. Mattresses and box springs from the final floors — seven and eight — were removed yesterday afternoon after the hotel’s final overnight guests checked out at noon.

Leclerc said exhibitors would begin to arrive at their converted office rooms on Monday and Tuesday to set-up.

Dave Romano, Loews Santa Monica Hotel Director of Catering and Conference Management, said only the beds were removed for the AFM exhibitors.

“One of the misconceptions is they think we take out all the furniture, but we just remove the beds,” Romano said. “Everything else in the room remains.”

He said all of the office rentals and equipment for each room is ordered months in advance by each individual exhibitor.

“With us, they’ve also ordered internet and electrical services because a lot of them are bringing in lights and other things that aren’t traditionally in the room,” he said. “We have to make sure we have enough electrical capacity to handle it. They’re required to tell us in advance what they’re bringing and how much power will be consumed. This weekend, our engineers are also going through all the rooms and adding power to make sure it’s all in place for them.”

It is estimated that 4000 to 6000 people will flow through the hotel each day of AFM.

When the conference ends at 5 p.m. on Wednesday Nov. 9, there is a quick turnaround so the hotel can begin to accept hotel guests again, Romano said.

“At 2 a.m. on that Thursday morning after the event we start to remove trash and put the beds back in,” Romano said. “We hope to sell 60 to 70 rooms on that Thursday night, but we won’t be a full operating hotel until Sunday Nov. 12.”

Next year is the final year in the contract between Loews Santa Monica Hotel and AFM to be the host venue of the annual event.

Leclerc said he hoped Loews would continue to host the event, but talks with AFM organizers are still ongoing and no final decision is expected until after this year’s AFM.

“We absolutely are intensely focused on delivering the exception experience for the client and the partners so that we continue to keep this market alive and well in the Santa Monica economy and community,” Leclerc said.

“We want to continue to see them stay in Santa Monica.”