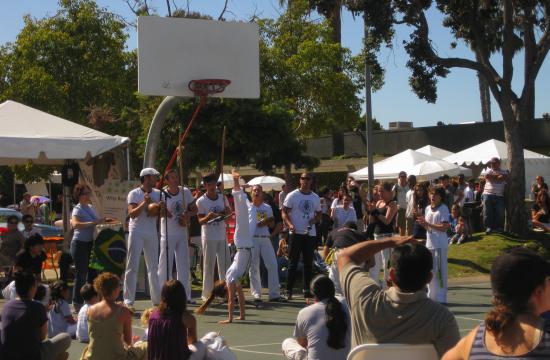 It was a perfect bright, crystal clear day for the community to gather for the 6th Annual Pico Festival and Car Show at the lush and spacious Virginia Avenue Park on Sunday.

Organizers touted the festival as “Step One” towards its vision to make Pico Boulevard known as one of the nation’s most appreciated art districts.

Robert Kronovet, chairman of the PIO, said another of the Pico Festival’s goals was to “support the young people and provide a chance for the young people to see how professional men and women organize and operate…it’s also about supporting and promoting the local merchants and residents of the Pico Boulevard area”.

The festival had many booths ranging from art and painting demonstrations by local artists, to balloons, food, and non-profit organizations, eager to talk about their contributions to the community. The park was filled with plenty of activity throughout the day.

People danced, and smiled as they crowded around the stage intrigued by all the talent. There were also several raffle drawings giving away all sorts of gifts and prizes.

Another huge part of the festival was the Car Show. More than fifty Classic Cars were showcased, including 1959 Chevrolets, 1964 Fords, and a 1923 Dodge. Under the beaming sun, the cars sparkled, perfectly preserved after decades since they were built.

All the proceeds from the Car Show will go to the Cody Williams Recovery Fund, the passionate SaMoHi fullback, and outside linebacker who was severely injured during a football game in 2009, and is now undergoing therapy and overcoming many obstacles to regain strength.

Throughout the park, there were families and kids admiring the cars and works of art, having their faces painted, and interacting with the many merchants devoted to the community.