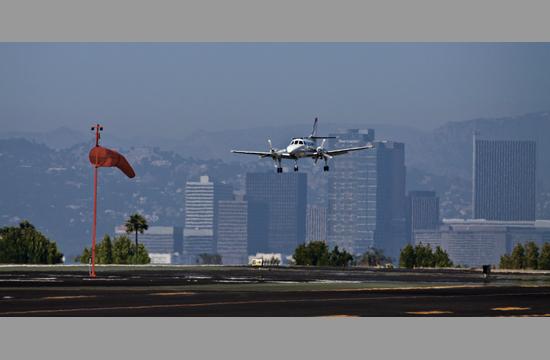 A shorthanded City Council unanimously voted at a special study session meeting on Tuesday to direct staff to move forward to Phase 2 of a three-part public process to potentially determine the future of the Santa Monica Airport (SMO).

“SMO is a complex policy issue … (that) defies a simple solution,” City Manager Rod Gould said, adding both the city and community may either amicably come to a definitive resolution about the airport’s future or fight an uncertain battle in federal court. “Today we will begin the process of determining how SMO will change and adapt in years to come. There is plenty more to be studied as this process unfolds.”

A big part of how the process will unfold involves the very next step in the public and community input process that characterizes the second phase of a planned three-phase study to determine the future of the 227-acre SMO campus.

According to the staff report, “The Phase 2 public process would provide an opportunity for all members of the public with an interest in the future of the Santa Monica Airport Campus to fully engage in an in-depth interactive discussion about its impacts, physical and policy relationship to the city and surrounding communities, and possible future opportunities.”

Phase 2 would involve a series of focus group meetings, each of about eight to 12 people in size, to be held in Santa Monica between January and March 2012.

Prior to the focus groups, members of the public will be allowed to participate in an open hour held at the SMO campus in December “to tour the site, its facilities, and operations.”

Once complete, Phase 2 will summarize the community input and then be presented to council members in May 2012, along with a proposal of the more analytical Phase 3.

Yet, the council’s approval to move forward with Phase 2 was not without contentious input from community members.

More than 50 people from Santa Monica and surrounding communities, including Los Angeles Council member Bill Rosendahl, spoke at the dais about their thoughts on how they would like to see the future of SMO play out.

Some suggested the airport be shut down.

In light of the Aug. 29 plane crash in Sunset Park involving a student pilot, others pondered the future of the six flight schools operating out of SMO.

Another contingent focused on environmental issues. Another concern was safety.

Of course, there were also a few who were in favor of SMO, claiming Santa Monica would actually be worse off should it ever be permanently closed down.

One thing is for certain, City Attorney Marsha Jones Moutrie said the closure of SMO prior to 2015 was illegal, stating the city is contractually obliged by the Federal Aviation Administration (FAA) to operate it for another four years.

“Though the airport is ours … (but) what happens (to SMO) is not solely up to us,” she said prior to giving a summary of federal laws governing aviation as well as the contractual history between the federal government and Santa Monica.

Opening up the public comment and speaking on behalf of his constituency of neighboring communities such as Malibu, Pacific Palisades, and other portions of West Los Angeles, Rosendahl garnered an enthusiastic response from the gallery when he emphatically stated his opposition to SMO.

“We’ve had enough of this airport. This airport does not belong here,” Rosendahl said, stating the airport is hazardous to his constituents’ health. “When this airport was built 80, 90 years ago … it made a lot of sense. Today, it’s in the densest urban environment on the west coast. Planning does change over time.”

Many speakers agreed with Rosendahl’s position.

Yet, there were those who were clearly on the other side of the spectrum, many of whom suggested the existence of SMO is either a necessary reality or the problems that stem from it are blown out of proportion.

Joseph Justice of Justice Aviation, the largest flight school at SMO, said businesses such as his were being unfairly targeted.

“Does anyone here know the last time a student pilot soloing, prior to (the Aug. 29 accident) crashed into a home?” he rhetorically asked. “Nobody who works at the airport knows it’s been so long. The people of Santa Monica are far more likely to be hit by lightning than to be hit by a student pilot.”

He also echoed the City Attorney’s statements that council members were drastically limited in the impact they would have in determining the airport’s future.

Shriver pointed out other avenues to pursue action, such as prodding federally elected officials to stand up to the FAA.

“This is a political matter. It needs political power to be exerted. The political power is not with this council. The other powers are much more likely to produce answers sooner,” he said.

Mayor Pro Tem Gleam Davis liked Shriver’s recommendation of a regional approach and took a practical view of how best to move forward.

“It’s not just a toggle switch or a light switch we could just turn off and go ‘okay, airport closed, problem solved’,” she said. “It’s not ‘can we close the airport’ but what do we do if we do close the airport.”

Council member Kevin McKeown stated the most important issue in moving forward is safety. Yet, almost as important is having a well-thought game plan before addressing the federal government about the future of SMO.

“We have to agree on what we want. We can’t go into the process and say ‘we’re not happy, solve it for us’,” he said.

Prior to the Phase 2 discussion, council members were presented with an update of Phase 1, which included a series of consultant findings on the airport’s relationship with the community, its economic impact to the city, and potential future trends.

Point C conducted a series of community surveys that found that SMO, as a facility, is inconsistent with “other aspects of life, policy, and community in Santa Monica.” Participants also seemed to have an openness to “identify alternative futures” for SMO, Point C found.

Paul Silvern of HR&A Advisors, Inc., talked about the airport’s role in the city’s economy, stating SMO’s direct financial output of $187.55 million is responsible for nearly 1,500 jobs. In the most recent Fiscal Year, SMO broke even, according to Silvern.

The RAND Corporation made a few suggestions for non-aviation areas of SMO, including efficient use of the airport’s infrastructure and the potential expansion of retailing, recreation, and the arts.

Also discussed was the possibility of SMO serving as an economic incubator, where small start-up companies will be allowed to reside and potentially “hatch” into larger businesses.

SMO was built in 1917 and became city property in 1926. For about 50 years, SMO was home to Douglas Aircraft Company and the largest employer in Santa Monica.

In the 1960s, SMO became a general aviation facility. The city fought with the FAA for years concerning airport noise from the jet planes flying in and out of SMO until, in 1984, both governmental parties came to a settlement agreement.

By adopting the 1984 agreement on airport operations, the city was allowed to enact “one of the strictest Airport Code and Noise Ordinances in the nation” to govern SMO.

According to staff, “these operational restrictions limit, among other things, the maximum allowable noise level an aircraft can generate, the hours of operation of the Airport, and the types of aircraft operations.”

The settlement agreement expires in 2015. With no official plans or contingencies yet in place by either City Hall or by the FAA, council members and local residents have actively been seeking a viable solution with how best to deal with the future of operations of SMO.

The city and the FAA have battled in court for decades; most recently, Santa Monica spent eight years and more than $1 million successfully litigating the ban of Category C and D jets.

During litigation, the FAA stated Santa Monica could not shut down SMO after the settlement agreement expires in 2015 “because the Instrument of Transfer, executed … in 1948, obligates the City to operate its Airport in perpetuity.” Even more, because of conditions attached to its acceptance of certain federal funds in 2003, Santa Monica must legally operate SMO until 2023, the FAA contends.

Council members Pam O’Connor and Terry O’Day were both absent from the special council meeting.