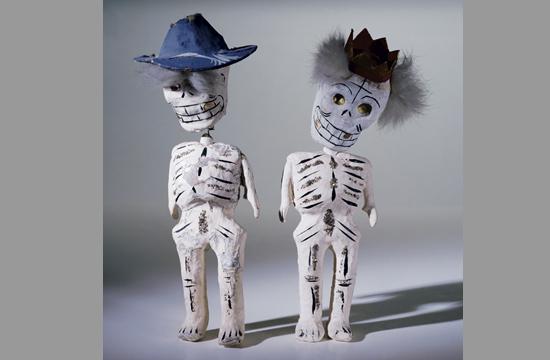 The artistic side of Halloween makes its way to SaMoHi for the next few weeks, as the Roberts Arts Gallery will be hosting the “El Dia de los Muertos” – or “Day of the Dead” art exhibition through Nov. 6.

On Thursday, Oct. 27, art lovers and Halloween fans alike previewed the art exhibition at a reception held from 5 p.m. to 7 p.m. Among the works featured at “El Dia de los Muertos” are the works of SaMoHi alum Daniel Alonzo.

The works of current Vikings, including retablos created by those enrolled in AP Art and Painting 2, will also be on display, side-by-side with the artistic creations of students from John Adams Middle School (JAMS), Grant Elementary, and Pico Youth and Family Center (PYFC).

In addition to the art exhibit opening, events will also be held at PYFC and Highways Performance Space.

From Nov. 2 to 4, the PYFC will be hosting a community altar and art workshop at its facility nearby SaMoHi at 715 Pico Boulevard. The 13th Annual Dia de los Muertos celebration at PYFC will feature art, food for sale, music, speakers, and blessings from the community altar.

A few more blocks east at Highways Performance Space, Paulina and Monica Sahagun will be presenting a Dia de los Muertos ritual from Nov. 2 through 5. This community altar will be constructed on Nov. 2 and a ritual ceremony, performance, and celebration will take to the stage on Nov. 4 and 5, all in the name of honoring ancestors and the recently departed.

The Sahaguns will be performing “Calavereando.” According to Highways, “Calavereando” is “a mask theater piece … inspired by the work of the Great Mexican Artist Jose Guadalupe Posada.” After the performance, a “Spiritual Party” will be held at Highways Gallery with traditional pan de muerto, tamales, and live music.

“El Dia de los Muertos” may be viewed at the Roberts Art Gallery, which is on the second floor of the history building at SaMoHi.