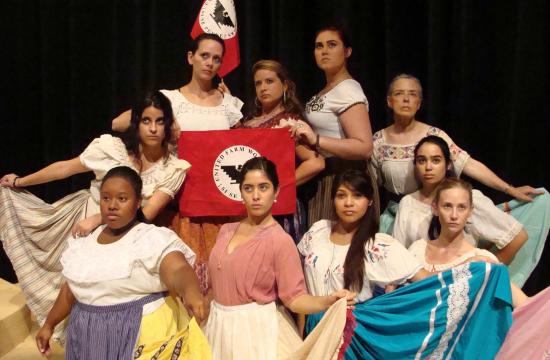 In what is being described as a dream collaboration, Santa Monica College will tonight present a newly reshaped “Cesar and Ruben,” a musical about civil rights leader Cesar Chavez written and co-directed by Emmy nominee Ed Begley, Jr.

The award winning and critically praised musical, which has had just three productions since its premiere in 2003, will run Oct. 14-23 at the SMC Theatre Arts Main Stage, located on the main campus at 1900 Pico Blvd.

“I’m proud and excited to be working on this production,” Begley said. “The play has found a wonderful home at Santa Monica College.”

“Cesar and Ruben” chronicles the life of Chavez through music, imagery and a conversation with slain Los Angeles Times reporter Ruben Salazar, who often wrote about Chavez. The show mixes humor and drama, music and dance, history and personal struggles, with songs in Spanish – and supertitles in English – by Sting, Ruben Blades, Carlos Santana and more. It also features a multi-ethnic cast of 26 and a significant audio-visual component.

“It’s a great partnership,” said Theatre Arts Department chair Perviz Sawoski, who asked Begley to be co-director with her. “Ed is easygoing, fun and has great energy, and the students really like him.”

“Perviz is so wonderful to work with,” Begley said. “And the students are amazing, so talented, energetic and eager to get this play up and running.”

Begley, who has been an activist and leader in the environmental movement through such organizations as Heal the Bay since 1970, first met Chavez in the early 1980s.

“Cesar told me, ‘I love that you’re saving whales and the oceans, but what about people?’” Begley recalled. When Chavez told him about the health hazards of pesticides on farmworkers, Begley was immediately intrigued and thus began a 10-year friendship and activist partnership that would last until Chavez’s death in 1993.

“I had the sadness and honor of carrying his coffin in Delano,” Begley said. “But what really struck me was when I looked back, there were thousands of people, as many as 35,000, in the funeral procession behind me. It was powerful.”

Yet, it wasn’t until several years later that Begley had the idea to write a play about Chavez’s life. An actor who first came to audiences’ attention for his portrayal of Victor Ehrlich on the long-running hit television series “St. Elsewhere,” and who has appeared in many major films, TV shows and plays, Begley had not previously written a play.

“Cesar and Ruben” had its world premiere in 2003 at the El Portal Theatre in North Hollywood, playing for nine weeks to packed houses. In 2007, after Begley did some rewrites and adjustments, the play opened at the NoHo Arts Center for an eight-week run to critical acclaim. It won a Nos Otros Award and four Valley Theater League Awards. The musical also received a production at St. Edwards University in Austin, Texas.

The birth of the play’s revival at SMC began a year ago when Begley met with officials at The Broad Stage at the SMC Performing Arts Center that in turn led to a meeting with Sawoski.

The script appealed to Sawoski because “the topic was interesting, the message is good and strong, and I usually have an affinity for something that is new and unknown.”

The two have worked together over the past several months to further refine and streamline the script, change the beginning and ending, and – most importantly to Begley – have all the songs performed in Spanish. (In previous productions, one-third of the songs were performed in English.)

“Everyone who knew it before says, ‘Man, it’s much, much better,’” Begley said.

Sawoski has also put her imprimatur on the show with her background in global dance styles, choreographing numbers inspired by flamenco (“The stomping is perfect because the tone of the piece is militant,” she said), Mexican folklórico, Afro-Cuban and even Irish styles.

On television he has appeared in such shows as “CSI Miami,” “Gary Unmarried,” “Recount” with Kevin Spacey, Tom Wilkinson and Laura Dern, and he has had recurring roles on “Six Feet Under,” “Arrested Development,” and “Boston Legal.”

Begley also starred in the West Coast premiere of David Mamet’s “Cryptogram” at the Geffen Playhouse in the role he first performed in Boston and New York. He also starred in Mamet’s production of “Romance” at the Mark Taper Forum.

In addition, he has directed several episodes of the hit show “NYPD Blue.”

Sawoski is a performer, director, choreographer and teacher. She has directed and choreographed several plays and musicals at SMC and elsewhere. Recently she directed “Camila,” which was a part of the Los Angeles Festival of New American Musicals.

Her 1996 Santa Monica College production of “Once On This Island” went on to become a national winner at the Kennedy Center/American College Theater Festival in Washington D.C. She has directed many other musicals and straight plays, and a recent musical co-directed by her was selected to perform for the 50th Anniversary of Shandong University in Jinan, China.

She teaches acting, stage movement and musical theatre at SMC, where she is the current chair of Theatre Arts Department. She has also taught at Long Beach City College and California State Los Angeles, which is her alma mater. She holds a black belt in Go-Ju Kai Karate-do and has performed in more than 200 demonstrations.

She is also a classical singer and recently performed a solo concert, “Canciones,” featuring music of Spanish and Latin American composers from the nineteenth and twentieth century.

Tickets are $20 general admission with discounts for students, SMC employees and senior citizens. For tickets call 310.434.4319 or go to www.smc.edu/theatre.