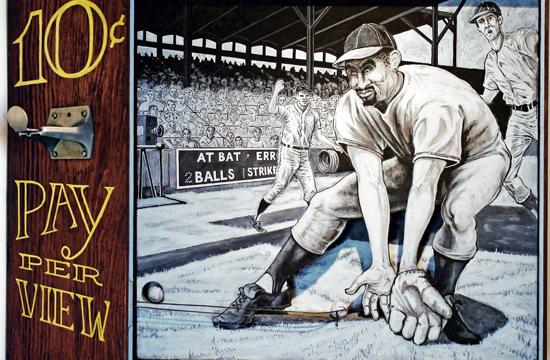 Silver’s exhibit covers many topics, but the baseball theme is apparent in two paintings of iconic stadiums and in a canvas entitled “The Show.” This consists of baseballs embedded in the canvas itself, covered with various bright dabs of oil paint.

“Dodger Stadium 40th Anniversary,” is a large canvas depicting the stadium in a misty gray tone. The only colors are those of the green turf and the brownish “76” sign over the scoreboard. The gray color palette might be portraying the smog through which the stadium can be seen. Although it was painted a few years ago, to current observers the misty gray might seem more like a comment on the recent travails of the Dodger organization.

On the other hand, Silver’s “Yankee Stadium” shows the “hot corner” being used for batting practice in the old Yankee Stadium (this was painted in 2008, the last year of the original stadium’s use). The colors here are vivid reds, greens, and orange but there is a slight raggedness to the art style that suggests the age of the old ball park.

Jezewki’s “Highball” is more about the cultural aspects of the game. Speaking to The Mirror at the exhibit’s opening, he noted that the sport has its own language which he has used in metaphors throughout the pieces on exhibit.

“Two Balls, One Strike” is an example of this cultural punning. The kinetic sculpture-painting looks like a straight painting from a distance-done in black and white acrylic on wood, it portrays a ball player who has lost the ball while two other players look on in consternation. The picture would be a cartoon in itself—but if a viewer pulls a lever at the side a ball (actually a golf ball) rolls out of the painting and hits the player in a sensitive spot. Ouch! Jezewski explains that this work was inspired by coaches’ safety lectures that he heard in childhood on “the dangers of not wearing a cup.”

“Full Moon,” another kinetic multimedia work, features a painting of a ball player with a sheep face surrounded by a frame adorned with tiny ball player miniatures that Jezewski found in thrift shops. If the sheep player portrait is opened, it reveals a cabinet containing wheels of fortune. Going back to the front portrait, one now sees that the player is holding a “crystal” ball rather than a baseball, in a comment on the fatalistic nature of the game.

There is also dark satire in other works like “All the World’s a Stage,” featuring Will Shakespeare holding a skull for a baseball, coming out to pitch at the stadium-like Stratford Theatre. “Nemesis” shows a Calaveras-style skeleton ball player; his torn uniform allows us to see flashing lights embedded under the outer canvas. In one hand he holds, not a baseball, but his heart, as if torn out of his chest.

And “Origin of the Species,” the largest canvas, depicts cave men, positioned like the defensive lineup in the field; the “pitcher” holding a huge boulder, the infielders holding spears, and a silhouette behind the men that, looked at from a distance, turns out to be the logo of Major League Baseball.

Though humorous on the surface, Jezewski’s art works show the dark side of baseball, even to comments on the tribulations of baseball legends like Tommy Lasorda and Jose Canseco.

Jezewski notes that people he met who liked baseball never showed up at his exhibits and the art world did not seem interested in baseball; hence he has tried to bring them together with his imaginative creations.

“Breath and Shadow” and “Highball” run at the Frank Pictures Gallery at Bergamot Station, Gallery A5, 2525 Michigan Ave. through Nov. 10.