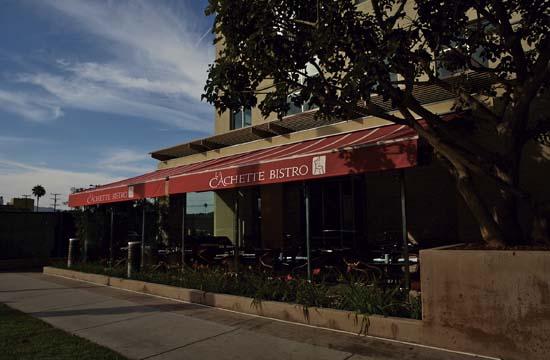 Since 1999, Jean Francois Meteigner has been sourcing ingredients from local Farmer’s Markets to craft his classic French menu with Californian flair at his Santa Monica restaurant La Cachette Bistro.

Unlike traditional French cooking, he uses a lot less butter and cream to shape his menu that features French tapas and even grass fed beef burgers and steak frites.

Meteigner has been a staple of classic French cooking in Los Angeles since he began as chef at the fabled L’Orangerie restaurant in the 1980s.

He was inducted into the Maitres Cuisiners as a Master Chef and remains one of only 349 in the United States.

After a decade at L’Orangerie he opened his very own La Cachette (Hidden Gem) in Century City in 1994, where he perfected the art of combining his classic training with a modern, low fat approach to cooking French food.

“The vision was to create a more casual setting with more casual food with less expensive prices,” Meteigner said.

Among the most popular tapas dishes, priced from $6 to $12, are the Braised Pork Cheeks.

The braised pork cheeks are marinated in white wine for two days, then braised in a stock with all the trimmings for two-and-a-half hours. They are served with lime, onion, and corn blini.

Another highlight is the Seared Swordfish Belly, which has plenty of rich flavor as it’s marinated with a mix of different spices, then seared until it’s medium-rare, sliced, then served with ponzu sauce and wasabi ginger mashed potatoes.

Continuing with seafood tapas items, the calamari is sautéed with olive oil and garlic with a little bit of piquillo peppers and green olives, sprinkled with herb pesto that’s more like a basil oil.

Moving onto the appetizers, the homemade fish platter is created from scratch in-house, and takes several days to prepare. The dish features smoked salmon and trout with crème fraiche, fingerling potatoes, and corn blini.

The salmon is soaked in a special salt brine for seven to eight hours before it is dried in a walk-in refrigerator for two to three days skin-up, then smoked for three hours. The trout only spends two hours in the brine, before it is smoked for one-and-a-half hours because it’s a much smaller fish.

One of the most popular main courses is the braised pork shank. The fat is cut out when it is delivered to the restaurant. Braised for three-and-a-half hours in a honey and vinegar stock, which gives your taste buds the best of both worlds when it comes to enjoying a sweet and sour sensation.

The steamed black mussels is another poplar main dish, which is prepared with more spices than the usual suspects of garlic and shallots. It also has turmeric, curry, garlic, and ginger powders in the broth.

About 90 percent of the menu is gluten-free, an initiative that almost came naturally, according to Meteigner.

“We don’t use a lot of flour,” he said. “When we need to thicken a sauce, we use corn starch instead.”

La Cachette Bistro offers a Happy Hour Tuesday through Friday from 5 p.m. to close and Saturday and Sunday from 6 p.m. to close. Wednesday is Ladies Night at the bar with 50 percent off everything. A new menu offers a $29 three-course prix fixe dinner as well as some interesting new dishes and the return of some old favorites.