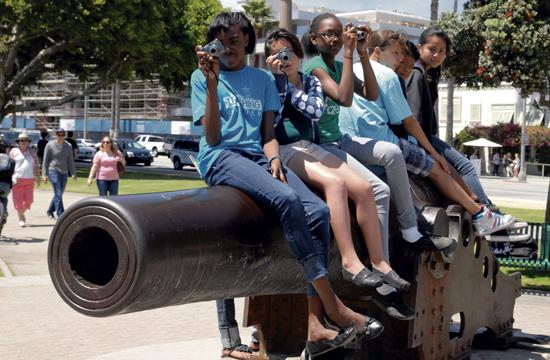 The Santa Monica Human Relations Council will conclude its third annual “Kids with Cameras” project this Saturday, Oct. 15 with a reception and photo exhibit.

The project involved participation in photojournalism workshops by local youth selected from the Police Activities League, Boys and Girls Club, and Family YMCA in Santa Monica.

By showing them the community’s wealth expressed through public art, the children were exposed to a world many of them would not experience otherwise.

Fabian Lewkowicz, a professional photojournalist, has supervised and mentored the group in the past. He was joined by photographers Dr. Charles Haskell, Nick Steers and Bill Beebe, and the City Public Art coordinator Malina Moore whose expertise and experience in Santa Monica’s artwork is invaluable.

During the eight week program, the youth met once a week to explore the rich displays of public art in the city.

Saturday’s finale will be held at the Santa Monica Boys and Girls Club JAMS Branch from 1 p.m. to 4 p.m.

It will feature a community dialogue, as well as a reception and photo exhibit with a slide show and performances by the youth organizations.

Among the artworks studied were “Santa Monica” (1934) in Palisades Park by Eugene Monrahan, “Chain Reaction” (1991) by Paul Conrad and “The Dinosaurs of Santa Monica”(1989) by Claude and Francois LaLanne.