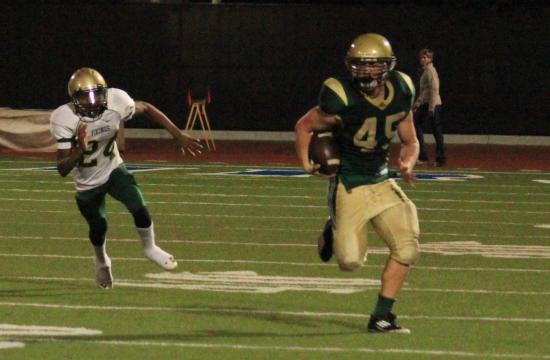 The Blair Vikings (1-3) did their best to stop the St. Monica Mariners (3-2) by shutting down much of their run game.

But they couldn’t stop Kevin Holubowski.

The fullback and middle linebacker scored three total touchdowns on the evening and led his team to a 33-7 victory on Friday night.

“We have a team saying, ‘who’s going to make the first play?’” said Holubowski who recovered a fumble in the end zone during the first five minutes of play after it was stripped away by the Mariner defense. “Our guys rose to the challenge, got in there, and ripped it out and touchdown.”

Holobowski scored his second touchdown during the first half on a dive straight up the middle. “I saw that they were on the right side,” said Holubowski about his first rushing touchdown and second score of the game. “I made the read right before the snap and I just went in. It’s just how it works. We got a cutback lane and I saw that it was open so I just went in.”

Holubowski finished the game with an offensive total of 35 yards receiving and two rushing touchdowns near the goal line.

“I’ll probably get four more ‘corns,’” said Holobowski. He went on to explain that “corns” were award stickers for big plays, touchdowns, and special teams hits.

“Every time you make a big play or get five tackles you get a new sticker,” said Holobowski. With nine tackles on the evening, that’s at least one extra.

Chris Corbally, who had three sacks on the night, is sure to receive some “corns” as well.

Running backs Nicholas Pegnato and Lawrence Major also had a good game with one touchdown apiece and combining for a majority of the team’s 153 total rushing yards in place of running back Sean Martinez, who suffered an injury in the first half.

Junior quarterback Luke Cain had an off night, completing only 5-21 for 72 yards passing. But the ground game carried the Mariners through.

“Luke’s going to have to bounce back from this game,” said Guerra who could be seen pacing up and down on the sidelines during the entire game.

Guerra could be seen coaxing his team, firing them up by egging them on, and challenging them to do better even when the clock was deep into the fourth quarter and the game was well in-hand.

“You’re out here to play a game and to play it right and do it right and I think the biggest thing is that we have to coach everybody up,” said Guerra about his coaching style. “If somebody goes down, we need the next kid to step up…I’m never happy until we’re winning the championship.”

“We got the momentum and the guys are starting to pick it up,” said Holubowski who took a lighter view of the victory. “Before we didn’t have this team vibe, and now everybody isn’t making plays for themselves but plays for the team and that’s what’s getting us ahead.”

St. Monica High School will have five days of practice to gear up for their last preseason game against Santa Clarita Christian next Saturday before starting league play the following week.