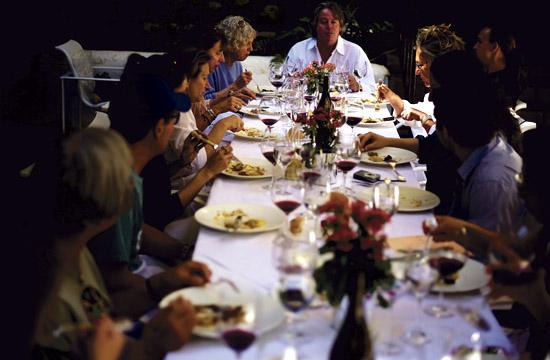 For those who’ve wondered what it’s like to shop like the professional chefs who are regulars at the downtown farmers’ market, Michael’s Market Meet-Up is just the ticket.

McCarty is a classically French-trained local chef who in the 1970s helped usher in a new California style of cooking that highlighted seasonal fruits and veggies. This was a new concept when Michael’s restaurant opened in 1979. The restaurant would go on to become a breeding ground for creative chefs like Mark Peel, Nancy Silverton, and Ken Frank.

The Mirror was invited to join this month’s Meet-Up, held on Oct. 12 for a group of 10 guests. Here’s a look at how it all went down:

8:30 a.m. The guests gather at the restaurant, located at 1147 Third Street, and mingle over a breakfast of cappuccinos and warm home-made cinnamon rolls. Among the group are newlyweds Laura and John Bwarie, who have made it a point to experience a new adventure together every month. Both took time off from work to attend the Meet-Up.

For Pacific Palisades resident Vicky Mercer, the Meet-Up was a birthday gift from her friend, Santa Monica resident Susan Delaurentis. Studio City resident Daphne Kirby came with her son Dash Kirby, who works as a cook at Zengo restaurant on the rooftop deck at Santa Monica Place. “Knowing my son’s interest, I was just waiting for a time when we can come together and share this experience,” she said.

9 a.m. The group leaves the restaurant and walks two blocks to the farmers’ market. McCarty and Kuramoto begin wending their way through the market, collecting their standing orders from their go-to farmers, talking with farmers about their coming crops, and tasting things that catch their eye. “That’s the fun. there’s always something different or new. You never really know what you’ll find,” McCarty said.

McCarty walks through the market commenting on the various farmers and pointing out his favorite farmers for particular ingredients. He introduces the group to Coleman Family Farm patriarch Bill Coleman and asks the group to taste a few of the farm’s unusual greens, such as the watercress-like papalo and lemony purslane. Alex Weiser, of Weiser Farms, tells McCarty he’s excited about the piquillo peppers that he’ll be bringing to market next year and shows the group the colorful fish peppers that are good for making gumbo. At the Windrose Farms stand, McCarty and Kuramoto select five varieties of apples and painstakingly improvise labels so they can tell the varieties apart back in the kitchen.

By the time Chef Kuramoto has finished his shopping, he has bought butternut squash and radishes from Weiser Farms, kabocha squash from Briar Patch Farms, 30 pounds of corn from Valdivia Farms, assorted berries from Pudwill Farms, a box of heirloom tomatoes from Coastal Farms, gaviota strawberries and beefsteak tomatoes from Harry’s Berries, and more. The chef’s cart is loaded with enough ingredients to last until the next farmers’ market, on Saturday morning. For each purchase, Kuramoto peels off bills from a big cash wad he keeps in his pocket, and asks for a receipt. The morning’s total expenditure: $380.

10:15 a.m. The group heads back to the restaurant for an elegant lunch in the garden patio. McCarty stops to buy lottery tickets at the newsstand on the promenade, a weekly ritual. Kuramoto goes into the kitchen and begins to send out a three-course lunch featuring the month’s seasonal vegetable theme: squash.

10:30 a.m. The first course is served – a butternut squash soup paired with a 2009 Campos de Luz Old Vine Garnacha. The tasty soup is accented by salty slices of chorizo, cool creme fraiche, and three forms (emulsion, juice, and segments) of orange, another crop that’s coming into season. The soup is followed by a dish of duck confit and squash-filled ravioli with parmesan, black kale from the morning’s market, and a blackberry sauce. A 2008 pinot noir from McCarty’s Malibu Vineyard is poured with the dish.

Over lunch, the affable McCarty entertains his guests, sharing thoughts on how gastronomy has changed over the decades. He talks about the way food has become more regionalized, based on the agricultural characteristics of a region. For example, Italian cuisine has evolved from two basic styles – northern and southern – to a variety of regional cuisines. He notes that the relationship between food and wine has come a long way since the early ‘70s, when wine was just for drinking. “Now, wine and food are made to complement each other. Wine makes food taste better, and food makes wine taste better,” he said.

11:30 a.m. Guests receive a signed copy of McCarty’s cookbook and a dessert of pumpkin cheesecake with caramel sauce to take home. As they leave, The Mirror asks them how they liked the Meet-Up.

“I thought it was fantastic; even beyond what I had imagined. I liked all the educational aspects,” said Daphne Kirby.

The morning was just as impressive for her son, Dash.

“It was awesome to check out the market and see who the best growers are,” he said. “I feel like I have a really good lay of the land now for when I come back and start getting more into the Santa Monica farmers’ market.”

“What’s amazing to me is the reasonable price when you think about all you’ve had – an amazing meal, breakfast, a cookbook, a personally guided tour of the farmers’ market,” said Vicky Mercer.

Laura Bwarie said she shops at the Studio City farmers’ market and liked learning new, fresh ideas for shopping for fruits and veggies.

“It was interesting hearing (McCarty) explain the different produce and how he looks at it,” Bwarie said. “It’s nice to have a different perspective from a professional.”