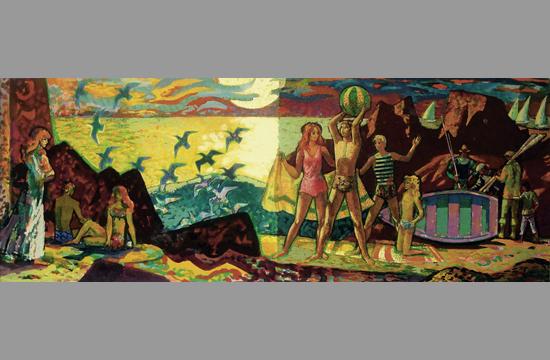 Where were you when you first heard the song “I Want to Hold Your Hand” by The Beatles?

Who were you with? How old were you? What was going on in the world? Politically? Financially? Personally? Hearing such a recognizable melody conjures up memories of the past.

The Robert Berman Gallery’s latest exhibition, “Paid to Play – Illustrating LA: 1945 – 1985,” does just that. It is an exhibition that celebrates iconic imagery of the past.

This exhibition features artists who earned their living as illustrators. This was a genre looked down upon by many in the art field.

Artists who were involved in such commercialism were considered to be “selling out” by many in the fine art world.

However, these artists created memorable works that have stood the test of time.

Iconic images such as Playboy, Levi’s, the Rolling Stones, along with major studio films

such as “American Graffiti” and “Tron” make for a nostalgic exhibition.

The artists who created these images dealt with fierce competition as well as intense deadlines.

Amongst the chaos, remarkable images were created, and will forever be associated with this generation.

“Paid to Play” is the first of several exhibitions to appear at The Robert Berman Gallery, which falls under the umbrella of Pacific Standard Time.

This unprecedented collaboration, initiated by the Getty Foundation, brings together more than 60 cultural institutions from across Southern California for six months starting this month to tell the story of the birth of the L.A. art scene.

“Paid to Play” is curated by Robert Berman, Dave Willardson, and Charles E. White III and celebrates the many overlooked artists who were commissioned to create imagery for profit.

Like a haunting melody, these undeniably memorable images stay with you. Prompting a visual, “Paid to Play” captures a moment in time…a snapshot of an era, forever emblazoned in one’s mind.

These iconic images stir up memories of a gentler past. Perhaps they are shadowed by one’s own internal subtext like a song that will forever stay in one’s mind. It brings back memories of a simpler time, before Twitter and Facebook, when provocative innuendo had just a tinge of sexuality to it, not the blatant sexual agenda forced upon us day after day.

The exhibition is a crossover of collectible art and fine art.

“Transformation” is a companion show to “Paid to Play,” focusing on art that was transformed from commercialism.