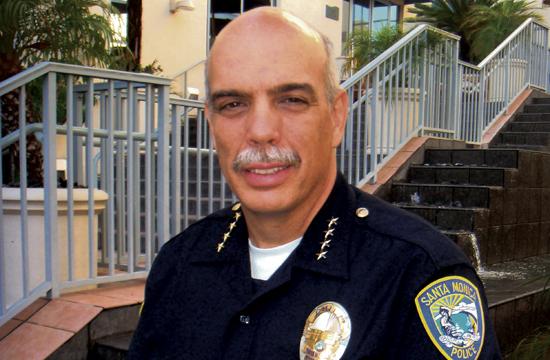 Santa Monica Police Department Chief of Police Timothy Jackman announced Tuesday that he is officially retiring from the top job in December, but he will stay on as interim police chief until the end of March while the City conducts a search for his replacement.

The 52-year-old spoke with The Mirror to reflect on his tenure, which will mark five years come December.

He said the decision had been a long time coming after much discussion with his family.

While he doesn’t have set career plans when he finishes up with the SMPD, he said he had a lot left in him “in terms of public policy or maybe even going to get more education.”

“Really what I’m focused on for the next six months is continuing to run the police department and making sure we provide quality service to our community, and I’ll worry about me a little later,” Jackman said.

Prior to his appointment as Chief of Police in Santa Monica in December 2006, he had previously served 24 years with the Long Beach Police Department, working in every major command, and leaving as a Deputy Chief.

Looking back on the past five years, Jackman said he hoped he had created a new, different, exciting police department that citizens now have more confidence in.

“The single thing that I would identify as being good is that we’ve gone 23 months now without a gang homicide in Santa Monica,” he said. “That’s taken an extraordinary amount of work, not just on the police department’s side, but our sister and brother agencies in the city, our community partners and the residents themselves working all together to make an extraordinary safe place to live, work, and play.”

When asked what legacy he might leave, he joked he didn’t live for legacies.

“What I hope is that there is permanence in the change of attitude towards government in Santa Monica,” he said. “I think that as a front-line department that people run into more than maybe any other, people gauge their confidence in their government through their police and fire departments. I think we’ve got really good police and really good firefighters.”

When it finally comes time to hang-up his uniform, he said he would miss the people the most.

“Whether they are my employees, or the residents, or visitors, I love people and this is a great community with some very unique folks, they are very fun to interact with,” he said.

When he assumes the role of interim Chief of Police in December, Jackman said he would help City Manager Rod Gould in any way he is asked to help with the search for his replacement.

He said his decision to stay on for an additional three months as an interim was to allow for a smooth transition for his successor, making sure there would only be one major period of change for the department.

“Really what it does it keeps the department from entering a period of potential chaos,” he said.