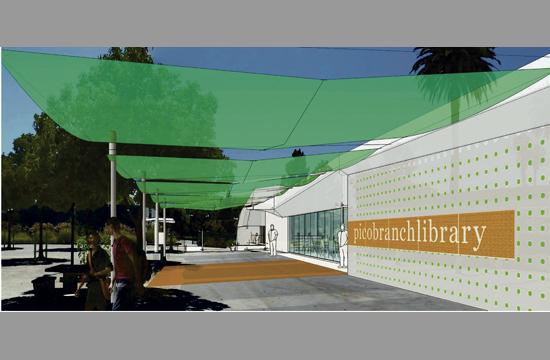 The Santa Monica City Council formally approved the design plans for the Pico Branch Library Project at its regularly scheduled meeting at City Hall on Tuesday night. With the unanimously approved design, city staff is officially allowed to move forward with putting together construction documents.

If all goes as planned, groundbreaking of Santa Monica Public Library’s fifth branch, which is planned to be built adjacent to the Thelma Terry Building in Virginia Avenue Park, will take place next summer. City planners anticipate the library’s doors opening in early 2014.

As for the building’s design, city architect Tom Afschar laid out for council members in a staff report how, once complete, the one-storey, 8,690 square foot structure will eventually look.

“Building on the folded roofs already found at the park center and patio buildings, the library design incorporates a dynamic roof structure,” Afschar said. “A large roof overhang to the east, towards the grassy side of the park, provides shaded areas for both library and park visitors. A strong visual connection between interior and exterior is achieved by incorporating clear glazing at all elevations, allowing views through the length of the building and out to the park.”

The library will also have a community room that “can function independently to accommodate park and community programs.”

Design plans were also mindful of the landscaping surrounding the new library.

“The landscape design is intended to integrate with the park by utilizing landscape design elements from the existing park such as plant selections,” Afschar added. “Several new trees would be planted for additional shading at new patios (surrounding the library).”

Another key element of the new library is that, according to Afschar, it will not disrupt the Saturday Farmers Market.

The Pico Branch Library had been talked about for nearly 20 years. Since 2009, an extensive process, including numerous presentations to council and several community workshops and design meetings, had vetted out plans for the new library branch.

“Having this in front of us tonight illustrates a couple of Santa Monica virtues: one is patience, the other is trust in process,” Council member Kevin McKeown said.

Council members made the new library a Redevelopment Agency (RDA) priority project in May 2009. Two years later, about $10.8 million in RDA funds were allocated to the Pico Branch Library Project.

“It is very beautiful. It is designed in the community, by the community. I think there is a lot of happiness that this project moves forward,” Mayor Richard Bloom said.

The project’s entitlements will be presented to the council at its Oct. 11 meeting; six days later, the Architectural Review Board (ARB) will consider the design plans.

Construction document preparations as well as contract bidding, negotiations, and award are all scheduled to take place in the spring and summer of 2012.

“I am happy to hear the project is moving forward,” Pico neighborhood resident Crystal Anderson said. “It seems that the project is concerned about sustainability of the environment.”